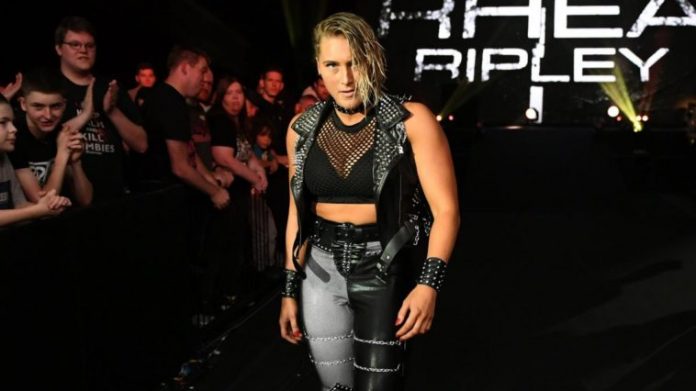 During an appearance on Flash Morgan Webster’s ‘Wrestling Friends’ podcast, Rhea Ripley talked about how she originally wasn’t scheduled to defeat Shayna Baszler for the NXT Women’s Title but plans ended up changing:

“So Shayna had pretty much gone through everyone in NXT, so I pretty much finished with NXT UK, handed it off to Piper [Niven] and I was coming into NXT to do that promo. So we were supposed to do a match later because everything was pre-recorded at that time, so we were supposed to do a match later on that night [for] a couple weeks after and I was supposed to tap out. That’s what was supposed to happen. It was supposed to be a one-off thing, I tap out, that’s it. So I went out, and as soon as my music hit, the whole Full Sail just erupted so loud. Like it was extremely loud. It was extremely loud! It doesn’t even sound that loud when you watch it back, but if you were there in person, it was insane and then I went into the ring, cut my promo the best that I have, and people popped so loud for that. Shayna left, I left, I came back and everyone backstage was just like, ‘Oh my God, that was really good.’ So anyways, Shayna and I, we go to get changed into our gear. Sara [Amato] comes running into the room, and Sara’s just like, ‘Guys, change of plans. Rhea got too much of a pop, we need to change the ending,’ and I was like, ‘Well, okay… like what are we gonna do?’ Shayna’s like, ‘We’ve been trying to tell you this for weeks. Every time we’re on a road loop, Rhea gets the biggest pop out of anyone’ and Sara’s like, ‘Yep! We believe you now. We need to change the ending.’

Legit, I was like, ‘Oh my God, so what’s happening?’ And they’re like, ‘So we’re gonna need to do a DQ so we can continue this some other time.’ I’m like, ‘Okay, cool. That’s cool with me, whatever.’” Rhea laughed. “So that’s why I hit her with the chair so we could continue it.”