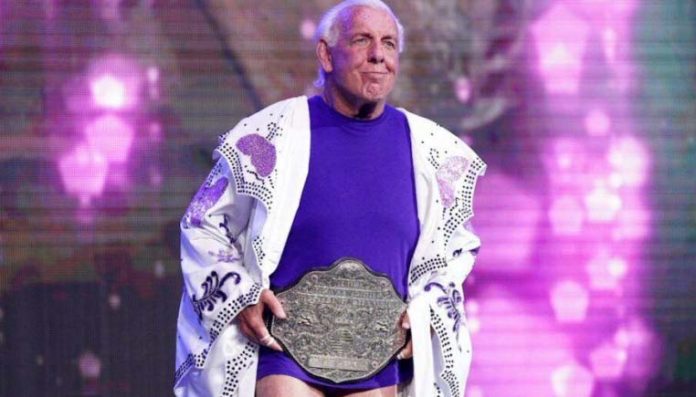 On December 10th 1972 yours truly was celebrating his third year on planet Earth. While I am sure I got cool presents and ate some cake, something of significance happened in the world of professional wrestling on that day. In the great city of Rice Lake, Wisconsin, Ric Flair had his debut match against George Gadaski on an AWA card. The match went a time limit draw and it was the first match of what became a legendary career for the Nature Boy.

A few days ago Ric Flair took to Twitter to celebrate being in the business of professional wrestling for 50 years. He thanked everyone who helped him celebrate the momentous occasion and posted a picture of him with a beautiful looking cake. He also stated that one thing is for certain – He will never retire.

Thank You To Everyone Who Helped Me Celebrate My 50 Years In The Business! One Thing Is For Certain… I WILL NEVER RETIRE! WOOOOO! #50YearsOfFlair pic.twitter.com/tOhGVpcrJB

I remember the very first time I saw Ric Flair. It was 1979 and I was a 10 year old die hard pro wrestling fan living with my family in East Meadow, Long Island.  We had just gotten cable TV and I discovered that on Sunday one of the channels had Mid Atlantic Championship Wrestling. Naturally, I watched it that very Sunday and that’s where I saw Naitch for the first time. He was feuding with Jimmy Snuka over the US title which Snuka held. I remember Ric Flair cutting a promo and I instantly became a fan. My admiration for Flair never ceased since that day back in 1979.

Another absolutely classic moment was WrestleMania 24 in 2008 as Ric Flair took on Shawn Michaels in a “Career Threatening” match. The storyline behind this match began in 2007 when Vince McMahon indicated that if Flair loses one more match, he must retire. The storyline had a great build through the latter part of 2007 and early part of 2008. It all culminated at WrestleMania 24 where Shawn Michaels uttered the words “I’m sorry, I love you” and “ended” Ric Flair’s career with Sweet Chin Music. This was the perfect ending to an incredible career….. or at least it should have been.

Ric Flair’s career was not over. He continued to wrestle first on Hulk Hogan’s Let The Battle Begin tour in Australia and then he became part of the TNA roster. Ric Flair’s run in TNA was less than memorable and he admitted he did it because he needed the money. In fact, you can argue the best Ric Flair segment in TNA was the Wooo! off with Jay Lethal. After two years in TNA, Ric Flair left the promotion back in 2011. At 62 years of age, it appeared his wrestling career was finally over.

In 2019, Ric Flair was rushed to the hospital after suffering a medical emergency that led to surgery in which doctors had to remove part of his bowel and insert a pacemaker. He was placed on life support and placed into a medically induced coma for 10 days as well. He was given a 20 percent chance of surviving.  We all know the Nature Boy pulled through and made a full recovery.  One thing for sure, after this and at 68 years old his professional wrestling career was definitely over, right? Wrong.

When I heard that Ric Flair who at 73 was going to have another match at an event called Ric Flair’s Last Match I was not thrilled. All I could think of was the danger Ric Flair was potentially putting himself in. But I gave him the benefit of the doubt and hoped he could somewhat deliver in his “Last Match”. I was wrong. Flair teamed with Andrade El Idolo and took on Jeff Jarrett and Jay Lethal. Sadly, Ric Flair was not able to perform anymore. He passed out twice during the match and said he was light headed as well due to dehydration. He was much less than a shell of his former self. He has stated he could not remember most of the match. It was hard to watch. I was hoping they would have stopped the match as there was legitimate concern from myself and many people for Flair.  But Flair somehow made it through the match and in my opinion it may have tarnished his legacy a bit. Thankfully this was his “last match”, I mean this has to be his last match right?

On November 27 at 69 years old Ricky Steamboat will be returning to the ring after many years away at a Big Time Wrestling show in Raleigh, North Carolina. Steamboat was asked to be a participant in Ric Flair’s Last Match but had turned it down citing he wanted to be remembered  for his great 2009 Backlash match against Chris Jericho. But I guess Ricky Steamboat just couldn’t stay away. On his podcast, Ric Flair stated – “Steamboat coming back makes me want to come back again”. And he posted the four words on twitter I was hoping never to see – “I will never retire”.  Flair had stated he started training again as well.

Being a huge fan of Ric Flair since 1979, I am going to leave you with this – Ric Flair is without a doubt one of the greatest professional wrestlers that ever lived. You could even argue that he is THE greatest. He has given countless people around the world fantastic memories. He has given you legitimate reasons to cheer him and legitimate reasons boo him. I can sit down and think of all the wonderful memories he has given me over many years. I remain a huge fan of his today. And as a huge fan of Ric Flair’s for 43 years, if I could say one sentence to him right now it would be this – Ric, thank you for the memories but please, please, please don’t ever wrestle again.