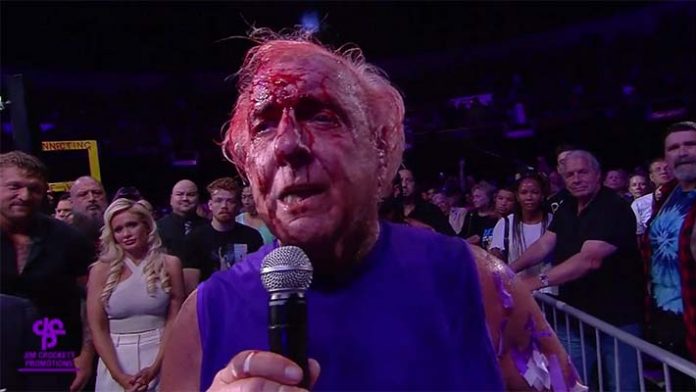 WWE Hall of Famer Ric Flair and Conrad Thompson revealed what transpired behind the scenes leading up to “Ric Flair’s Last Match” event in Nashville on the most recent episode of “To Be The Man.”

On his last match, Flair said, “I don’t think people realized I passed out twice. What happened was, my regimentation for training was so strict. I wanted my perfect weight to be like 220 going in. So the last day and a half, aside from all the work that we had planned for me to do, I didn’t hydrate because I had it in my mind that I had to weigh 219. So anyway, I went to the ring at about 217 pounds. What happened during the match is I just became dehydrated. While I was standing on the apron, I looked at Jay which started the whole wheel in motion. I said, ‘Man, I think I’m getting sick’, because I was getting lightheaded. Nothing to do with my heart. Nothing to do with my intestines. I was getting lightheaded. I’m sure a lot of it was nerves as well. So I think Jay said, ‘We got to move this along’, and that isn’t what I meant, but to the point where Manny (Andrade) came over and said, ‘Your turn, sir. Your turn, sir. Your turn, sir.’ So I got in, but I didn’t know we were in the match because I had missed about clearly like 10 seconds of it. So then when I went outside, I think everybody just jumped the gun a little bit.”

On the second time Flair passed out, “The idea was he gave me the tag and I crawled. But I got all that, and the people got all that. I thought they were really with it. I crawl over, cover, one, save. Then at that point, along came the guitar. You know, bingo. When I was down, I passed out again. I just passed out, and Manny is going ‘Sir, you have to wake up.’ I had the brass knuckles. ‘Sir, you have to wake up.’ Okay, so then I woke up and I knew where we were and we’re home. But I swear to God, twice during the match, I went completely black.”

“It was all about dehydration. I had two doctors in there right away with me and everything and The Undertaker came running in. I had like six beers there. He took them out of my hand and said, ‘You’re drinking two Gatorades first.’ So I drank two and that was all it was. I underestimated the importance of keeping hydrated.”