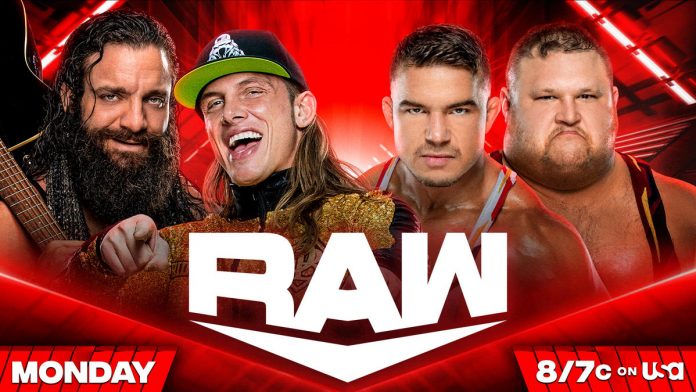 You can officially pencil in a new match for next week’s episode of WWE Monday Night Raw.

On Saturday, WWE.com released an announcement confirming Riddle & Elias vs. Alpha Academy in a tag-team bout for Monday’s Raw.

Previously announced for next week’s Raw is a Miz TV segment with The Miz talking to Dexter Lumis, as well as Seth Rollins vs. Finn Balor in a showdown for the United States Championship.

Featured below is the official WWE website announcement regarding the addition of Riddle & Elias vs. Alpha Academy.

Ever since returning, Elias has had a tough time, most recently suffering a loss to Otis.

He has, however, found a fan in Matt Riddle, who keeps insisting they form a band. With Elias’ musical talents and The Original Bro’s superb bongo ripping, the two would light up an audience.

Now, they get to do just that as they team together for the first time to take on Otis and Chad Gable of Alpha Academy, who will look to make Nov. 14 the day the music died.

Can Elias and Riddle form a cacophonous unit, or will Alpha Academy continue to spoil all the fun? Don’t miss Raw this Monday at 8/7C on USA!

Make sure to join us here at PWMania.com on Monday night for live WWE Raw results coverage!