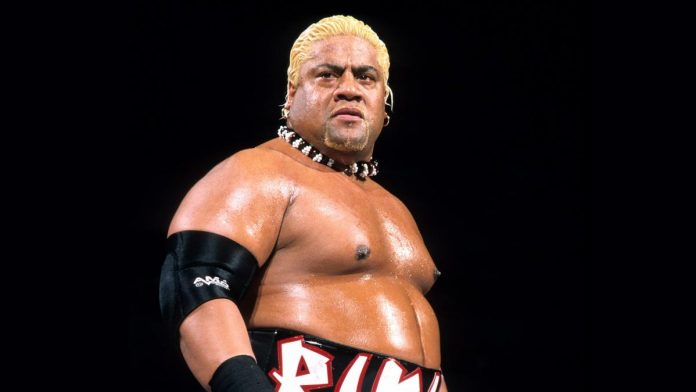 WWE Hall of Famer Rikishi recently spoke with Brandon Robinson of Bally Sports about a range of topics, including the growth of his character. Throughout his pro wrestling career, Rikishi has played both a babyface and heel.

“Wow! I’m honored to be compared to a legend and an icon like Shaq and what he does on the court,” Rikishi said. “You know, I always believe that God has timing for everything, and when this character came about for me, it was just about the end of that time for me going through multiple characters to find it, and the ingredients for that character for me was to just go out there and have fun. After all the years of experience of seeing what’s out there, my mind went to another level. What can I do to make this character different and fun from those that have been before me?

“In regards to my characters, I was honored to do this character Rikishi. I didn’t want it to have a spinoff of my cousin’s character [Yokozuna, out of] respect to him; so when that character came to me from Vince McMahon, we talked about it, and the only thing that I was worried about was — you know, back in the day my kids were young still in high school, and you know how ruthless kids can be, and I didn’t want my kids to carry that weight. And we had a meeting, and when they showed me the photo from the creative services in WWE, I took that photo, and I told Vince, ‘Let me think about it Vince, and I’ll get back to you…’ and I went home, and I showed the picture to my kids, and I showed my family, and it’s exactly what you see with the thong, ass out, you know? Just everything! Just hangin’! [laughing] and at the time, I put on weight; at that time, I was about 450lbs, so I was pretty huge and pretty thick back then at that time! But the thong thing, at least Uncle Rodney/ Uncle Yoko had tights to cover the backside, and I’m like for me, I wasn’t worried because I always talk shit about what the man gave you. I was BLESSED! That’s the way I looked at it!

“But I just wanted to get confirmation from my family that they were ok with it. And soon when I got the green light from my family, the rest was history. I was going to put my all into it. I already knew Brandon when I came up; there were two things that were going to happen: Number one — the fans are going to look at me and say, I’ll be damned… what is THAT? Number two — I was going to make them forget about me wearing a thong but showcase my skills through that character, meaning that you can change everything that’s out here, but I’m STILL Samoan. I’m still that brother that can go — the Headshrinkers, the Sultan, Make A Difference all in one! And here comes Rikishi. Now the dancing part was my hustle back in the day in the Bay Area.

“As a young kid, 14-years old, I used to go to Pier 39, and I used to go dance out there and used to mime dance and strut and all that stuff to try to make some extra change back in the day because my father worked for a construction company and he also worked for a laundromat, and he also played pool at night to make some extra money. Our mother used to work in the hotels where she was a housekeeper, and she’d always tell me all the time, ‘Every time you check out that hotel room, you make sure you put a tip on that dresser for those people there.’ And so, coming from that environment, I knew I gotta do my part. And so, that’s it from there all the way to the Rikishi deal.

“I said, you know, every time a wrestler wins, they put their hand up and raise their hands, or they would go to their corner and raise their hands… I said, ‘How about we flip the script on these people? How about we turn this wrestling arena into a club? Let the lights go down, and all the bulbs turn different colors? And let’s take this big 450 lb Samoan from a fighting machine to somebody that can bust a move.’ And we tried it one time, Brandon, and the next thing you know, it was on a Sunday Night Heat show back in the day before Monday Night RAW. We tried it there, and the next thing you know, we’re on the following week; we’re already on Monday Night RAW, and the rest was history.”