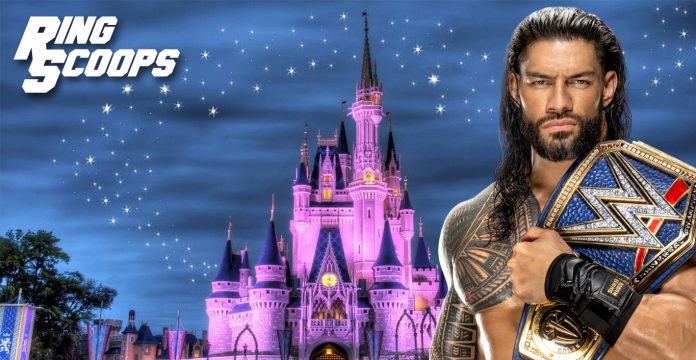 One of the biggest rumors for the better part of a year has been if WWE is setting themselves up to sell.  Many names have been mentioned as potential buyers during these rumors.  Companies such as Disney, NBC Universal, and AMC just to name a few.  There is a specific company that has garnered my interest: Disney.

While at Disney’s California Adventure in mid-September, I started to think about some possibilities on a Disney-owned version of World Wrestling Entertainment.  This all happened while I was enjoying my lunch at Avenger’s Campus.

While munching on the Not So Little Chicken Sandwich and the Choco Smash Candy Bar at Pym Test Kitchen, a battle between members of The Avengers and some villains occurred.  Black Panther and Black Widow were atop a building trying to foil the plans for these villains when a very entertaining street fight went down.  Unfortunately for The Avengers, the villain escaped after they used a smoke bomb to distract the heroes.  This got me thinking.

Disney has done a fantastic job with the Star Wars and Marvel brands since purchasing them.  Star Wars Galaxy’s Edge and Avengers Campus are part of their theme-parks, and fans around the world love them!  Imagine, if you will, a WWE-themed section to a Disney theme-park.

Just like Galaxy’s Edge and Avengers Campus, characters from WWE could roam around interacting with fans.  Impromptu matches could start after a baby-face and heel have an encounter while fans are mingling. This leads to a match center-square in the WWE-land with full fanfare.  Post-match interviews with fans could be a staple as well.

One thing a lot of independent promotions do at their events is a photo-op at intermission.  Pay five bucks and have your photo with the baby-faces in the ring.  Disney could take that concept and elevate it to the next level, as they do with everything else within their theme-parks.

Of course, there’s also merchandising!  Want to buy a replica championship belt?  You won’t need to attend a show or buy online anymore.  Get one at the park!  T-shirts galore all over the place, as well as action figures, plush dolls, hats, etc.…

Finally, this would be the ultimate solution to the long-lived debate about a physical WWE Hall of Fame.  There would be no excuse to have some sort of display to honor the legends.  There could be a mix of permanent fixtures along with rotating exhibits depending on the time of year or circumstance.  Personal appearances, autograph signings and more with WWE Hall of Famers would grace the area.

I don’t know about you, but I know I would be extremely jazzed to visit a WWE-themed section to a Disney-park.  The possibilities are endless with what could be done.  What do you think?  Feel free to shoot me an email to wade-@-ringscoops.com and let me know what your thoughts are on this topic.  Thank you for reading!  Be Cool!