ROH Wrestling sent out the following press release, revealing that the company will be hosting a virtual trivia night on Thursday, April 30th at 7:00PM EST on Zoom:

PLAY ALONGSIDE ROH STARS ON ROH TRIVIA NIGHT ON ZOOM!

Do you know a lot of trivia about Ring of Honor? Would you like to put your knowledge of ROH to the test against other fans as well as the ROH star themselves?

If so, you’ll want to take part in the first-ever Ring of Honor Trivia Night on Thursday, April 30 at 7 p.m. Eastern on Zoom.

If you would like to play, please email rohtrivia@gmail.com with your team name and the names of the players on your team. Teams should have anywhere from 3 to 10 players. The deadline for entry is Wednesday, April 29 at 9 a.m. Eastern.

Team captains will receive an email that day with a link to the game and instructions for the rest of their team. All players must be 18 years or older.

So brush up on your ROH knowledge and join us for a fun night of trivia! 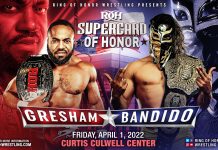