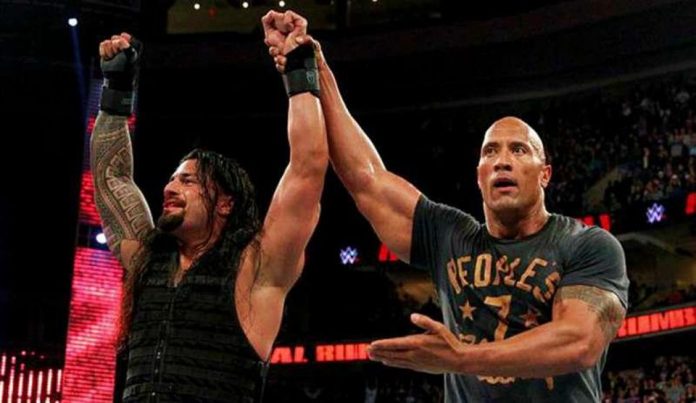 As noted earlier, WWE held the WrestleMania 37 press conference earlier today at SoFi Stadium & Hollywood Park in Inglewood, California, which is in the Los Angeles metro area. Roman Reigns and RAW Women’s Champion Becky Lynch were the two Superstars that appeared for the event.

Fernando Ramirez of NBC San Diego tweeted this clip of Reigns commenting on a potential match between himself and The Rock in 2021.

“I said it earlier. Man, if there’s a stadium to hold… Hey DJ, check it out. Not bad, right? I mean, everyone’s always dream-matching me and him. First of all, we’re family so it’s all love, but if there was going to be an event for him to compete in, to perform in, a venue to hold that mass scale of attention that he’s going to bring… it’s right here in your backyard, you know what I mean? Ya ain’t gotta go far,” Reigns said of Rock possibly working The Grandest Stage of Them All in 2021.

Reigns also took to Twitter and commented on his day at the stadium. As reported in the recap, officials stated that they are around 85% done with construction, which was going on during the press conference. WWE Chief Brand Officer Stephanie McMahon and others at the presser commented on how unique and “iconic” the stadium is, ahead of the official opening this July. Reigns tweeted and said it’s amazing to see the progress of the stadium.

“Pleasure to help announce @WrestleMania 37 @SofiStadium in Los Angeles. Amazing to see the progress of this place … can’t wait to get y’all in it next year!!! #WestCoast,” Reigns tweeted.

Pleasure to help announce @WrestleMania 37 @SofiStadium in Los Angeles. Amazing to see the progress of this place … can’t wait to get y’all in it next year!!! #WestCoast pic.twitter.com/UggOx0sZm3

#WWE Superstar @WWERomanReigns pitches having a match against his cousin .@TheRock at Wrestlemania 37 which will take place at SoFi in Los Angeles. He said it would be a dream match. pic.twitter.com/f6Y2PZoRsq