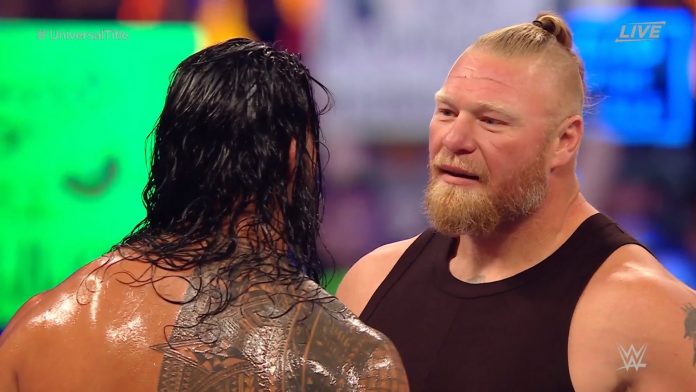 “The Tribal Chief” is ready to deliver one last beating to “The Beast Incarnate” at “The Biggest Party of the Summer.”

Following the announcement of Roman Reigns vs. Brock Lesnar in a Last Man Standing match for the Undisputed WWE Universal Championship at WWE SummerSlam 2022 on July 30 at Nissan Stadium in Nashville, Tennessee, “The Head of the Table” took to social media to comment on the match.

“I’ve been standing as the ONLY one at the top of the mountain,” Reigns wrote in a tweet replying to a post from the official WWE Twitter feed promoting the Reigns vs. Lesnar main event for WWE SummerSlam on 7/30. “On the Island of Relevancy. At the center of it all.”

Reigns added, “One last ass-whooping for the beast. #WreckEveryoneAndLeave #SummerSlam.”

The Reigns vs. Lesnar main event for SummerSlam 2022 was announced after Reigns’ title defense against Riddle on last week’s episode of WWE Friday Night SmackDown, which saw Lesnar return and take out The Bloodline in his first appearance since losing to Reigns at WrestleMania 38.

Make sure to join us here at PWMania.com on 7/30 for live WWE SummerSlam 2022 results coverage from Nashville, TN.

I’ve been standing as the ONLY one at the top of the mountain.
On the Island of Relevancy.
At the center of it all.
One last ass-whooping for the beast. #WreckEveryoneAndLeave #SummerSlam https://t.co/rnXiYyxqKq