Roman Reigns has trolled King Baron Corbin in the comments section of a new Instagram post Corbin made. Corbin took the time to post a selfie from the bushes after falling on his bike this week.

“Would you believe me if I told you I landed in the bushes on purpose? #mtb #santacruzbikes #alafiariverstatepark #wwe,” he wrote as the photo caption.

Reigns responded in the comments and trolled Corbin for some of his SmackDown losses. He wrote, “On your back… just like at work!” 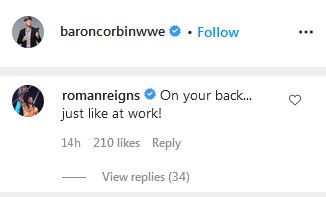