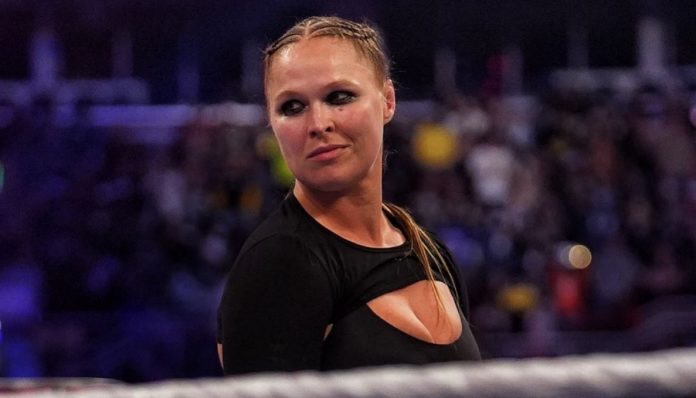 Ronda Rousey faced a ton of heat from the pro wrestling community back in 2020 when she spoke about the industry being “fake fights for fun.”

During her appearance on The Kurt Angle Show podcast, the Olympic medalist in Judo and former UFC Women’s Bantamweight Champion addressed the controversial remarks from two years ago.

Featured below is an excerpt from her appearance where she discusses this as well as injuries.

“It really does help a lot, and I don’t think pro wrestlers understand how much that it helps because a lot of times I’ll hear people be so offended that like, ‘How dare you call this fake! There’s no fake way to go through a table,’ or ‘This injury is real.’ And I’m like, ‘You guys, it’s not like the physical toll that makes something real.’ The injuries don’t enter into your mind. It’s the anxiety and uncertainty of the result,” that makes the situation real, as opposed to the predetermined outcome of a pro-wrestling match.

“Imagine if you didn’t win that gold medal, Kurt, and what that would have done to you for the rest of your life. That is what makes it real to me. Injuries, I don’t care. People get injured all the time playing ‘Pirates of Penzance,’ There’s a lot of difficult, physical things out there that the realism to me is that extreme anxiety.”

Check out the complete Ronda Rousey episode from The Kurt Angle Show by visiting CumulusPodcastNetwork.com. H/T to WrestlingInc.com for transcribing the above quotes.