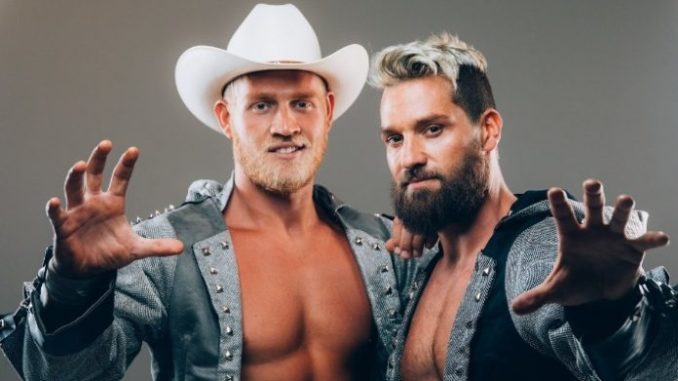 Arguably the greatest tag team in MLW history, Ross and Marshall Von Erich’s current deal with MLW is set to expire on June 1, 2023.

The longest reigning MLW Tag Team champions made an appearance recently on Two Man Power Trip of Wrestling Podcast in which they confirmed the expiration date of their current MLW contract and also indicated their time with MLW could come to an end.

Marshall: “We’ve been taking the last month to get back into shape and take — we’re gonna pour our next five to seven years, maybe even longer but, we feel like it’s time. I know a lot of people don’t know but I guess our time with MLW is almost up, I think June 1st is when our contracts are up so we’re just gonna see what happens after that, play the field, you know? Never say never but we’re just gonna, yeah, see what comes to us after this.”

Marshall and Ross also discussed possible destinations such as AEW, WWE, Japan or remain with MLW:

Marshall: “We’re gonna see how the cards unfold. Now, we’re definitely open to anything. Open to staying with MLW, open to AEW, WWE, any promotion that will offer us — maybe go back to Japan. We’re open to anything. I’m not gonna say ‘absolutely not’ to anything but, you know, right now, we’re getting some dates nailed down. I can’t confirm anything yet because I’m still talking to promoters and working out flights and stuff but, we wanna do a comeback. Come back to the States and wanna try to land everywhere or do some shows everywhere just to get our name out there, get our name back out there and let people know we’re still doing our thing.”

Ross: “Maybe show some love back to everybody that showed us love because, you know, if we do hypothetically sign some contract and we’re not able to do these things, we’re always gonna have such good memories of the indie scene so we just wanna really get that out of our system I guess.”

In addition, while they have be away from MLW for the last few months as they were taking care of family business (as stated in the interview), they were asked about possibly returning at MLW’s upcoming January 2023 event Blood and Thunder:

Marshall: “We haven’t heard anything yet but yeah, we definitely want to be a part of it for sure… MLW has been a huge blessing in that regard [experiences they’ve had in wrestling through MLW]. We love the whole team, we love all the guys up there and stuff. Made some brothers and stuff so, who knows? Hopefully we’ll keep on doing MLW shows after the contracts are up but we’ll see. I’d say we’re in a good relationship with Court [Bauer] and everybody up there so, yeah, we’ve taken some time off for the house and Court respected that and stuff so yeah, that’s where we’re at right now.”

Ross and Marshall Von Erich were last seen in MLW back in May 13, 2022 as they lost a triple threat tag team title match to the current tag team champions Calvin Tankman and EJ Nduka who defeated them and Hernandez and Rivera.