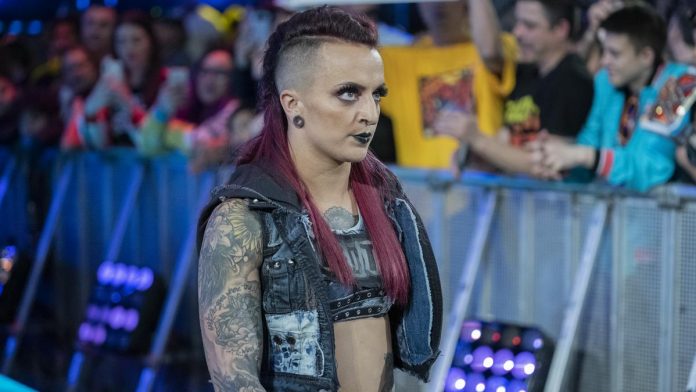 Ruby Riott made her return to WWE RAW during tonight’s episode on the USA Network.

The first match on this week’s RAW saw Liv Morgan defeat Lana in singles action, for the second week in a row. After the match, Ruby Riott came out to make her return. The former Riott Squad members went to hug in the middle of the ring but Riott slammed her and beat her up some. Riott then attacked Liv from behind while Lana distracted her. Riott made her exit, stopping to turn back around and smile at Liv in the ring. Lana took advantage of that distraction and dropped Liv again.

We recently noted how Riott had returned to in-ring training at the WWE Performance Center. She is now medically cleared to compete after being out of action since undergoing double shoulder surgery in 2019 – one operation on her right shoulder in May, the same operation on her left shoulder in August. Ruby hasn’t wrestled since the May 17, 2019 WWE live event from Cardiff, Wales, where she, Tamina Snuka, and Lacey Evans lost a Fatal 4 Way to RAW Women’s Champion Becky Lynch. She hasn’t wrestled a TV match since losing to Dana Brooke at the April 22, 2019 WWE Main Event tapings.

The Riott Squad originally featured Riott, Liv and Sarah Logan until the group was split up when Morgan moved to SmackDown in the 2019 Superstar Shakeup. Liv recently returned to the red brand for the feud with Lana, but there had been no talk about the group reuniting now that all three are back on RAW. There’s no word yet on if Riott will be joining Lana for the feud against Liv, but we will keep you updated.

Below are a few shots from tonight’s return at the Vivint Smart Home Arena in Salt Lake City, Utah: