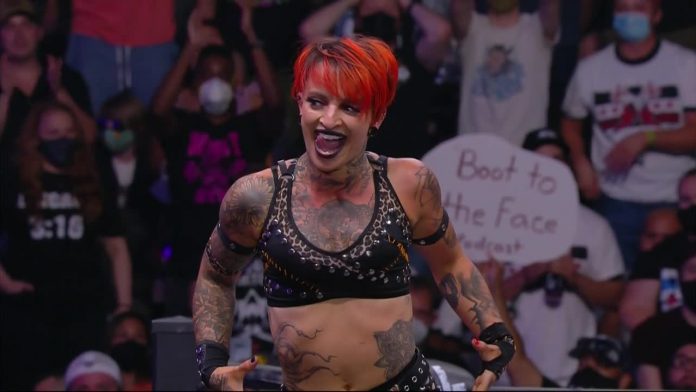 AEW star Ruby Soho says bringing Owen Hart’s legacy into AEW is something that really means a lot to the company and is a beautiful thing.

On Friday’s AEW Rampage, Soho will face Kris Statlander in a semi-final match for The Owen Hart Foundation Women’s Tournament. The winner of that match will face the winner of tonight’s semi-finals match between Toni Storm and Britt Baker on AEW Dynamite on Sunday’s Double Or Nothing pay-per-view. Soho was recently asked about AEW’s partnership with The Owen Hart Foundation by Mike Johnson of PWInsider.

“I thought it was a beautiful thing,” Soho said. “And you know, knowing our roster, and especially the respect that we have for Owen Hart and his family, that we were gonna leave it all out in the ring, like we were going to do everything that we could to bring the legacy of Owen Hart, you know, into a light that he could be proud of and that his family can be proud of. So I’m insanely honored and I love the fact that you know that there was a men’s and women’s tournament. That was a really beautiful thing to me and to be able to, you know, participate in that and to you know, hopefully, you know, make his family proud, you know, which were, you know, the things that were the most important thing in the world to him was his family.

“It’s truly an honor and I think that you know, just seeing some of the matches that have taken place in the quarterfinals and pre-qualifying matches and things like that, you can tell that this means a lot to not only myself but the rest of the roster because we you know, we want to do his memory proud.”

Soho qualified for the event by defeating Robyn Renegade, and then defeated Riho in the quarter-finals.

Soho says Storm is on her bucket list of opponents, but she also has unfinished business with Baker.

“I love Toni Storm. I adore her as a person and as a performer I love her,” Soho said. “She is insanely talented, super charismatic, and just a wonderful human being and she has been on my bucket lists to wrestle for a very, very long time. So that would be amazing as far as I was able to face up against her.

“However, Britt Baker and I have some unfinished business. If I were to be able to give her the receipt that I have been dying to give her since Arthur Ashe Stadium, I would really, really enjoy that.”