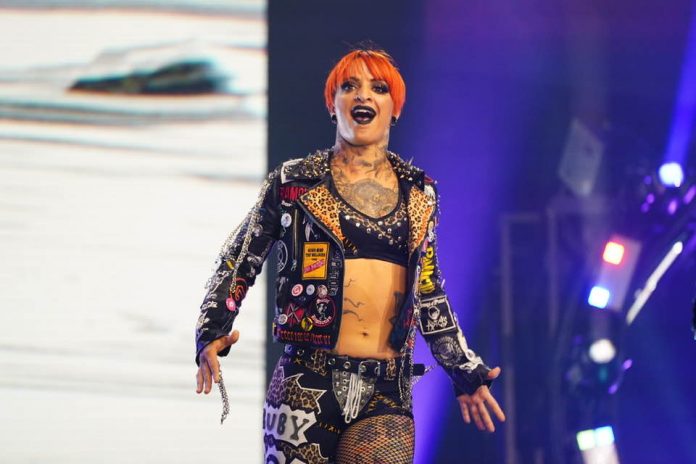 AEW star Ruby Soho says AEW Double Or Nothing will be one big party, with the company going “balls to the wall” for the fans.

Soho was recently interviewed by PWInsider’s Mike Johnson and was asked why fans should watch Sunday’s pay-per-view from Las Vegas.

“I would say this week from, because obviously I was new to the company in regard to this particular paper view, this is going to be my first Double Or Nothing to either hopefully take part in or or watch, this from what I understand, you know, one of one of if not our biggest pay per view of the year,” she said. “This is the moment where we go balls to the wall. We do everything that we can and by any means to put on the best show possible and you know, the fans in Las Vegas, I can only imagine. I think I may have wrestled in Vegas years and years and years ago, but are going to be incredible.

“It’s going to be one big party, but that does not deflect from us working tirelessly to make sure that you know, we all stand out, we all want to stand out in these big shows knowing that the world was watching. So I highly recommend it because I don’t think you’re gonna ever see anything like it in your entire life because it’s going to be, you know, I believe one of the best pay per views that we’ve ever put on and we put on some pretty amazing pay per views. So I think there’s going to be a lot to be said for that for sure.”

When asked about AEW Women’s World Champion Thunder Rosa defending against Serena Deeb at Double Or Nothing, Soho said that she has been chasing Deeb for most of her career.

“So I have been on a chase to wrestle Serena Deeb for most of my career. I’ve been one step behind her in every company that we’ve worked for, on indies, in Japan, OVW and going forward,” Soho said. “I am a huge Serena Deeb fan, and Serena and this new mentality that she had, you know, in recent months, has brought out you know, a level of Serena that you know has only further impressed me. She’s vicious, she’s ruthless, but she’s relentless. And I think that she has been underrated for most of her career. People don’t realize just how good she is and I think she is not even as hungry – starving to have that validation of being AEW Women’s World Champion. And so I think she’s gonna do whatever it takes.

“That being said, I’ve shared the ring briefly with Thunder Rosa, when I made my debut at All Out and Thunder Rosa probably hits harder than most people I know, I’ve wrestled a lot of people and she, you know, worked very, very hard and very tirelessly to obtain that title. And you know, went through a lot. You saw the match that she had with Britt Baker, you know, she came out on the other end, she didn’t come out unscathed by any sense of the word. So I don’t think that she’s going to give that title up without a fight. So I think on both ends, both women have something to prove – Thunder Rosa saying and being that she can be a fighting champion and Serena, proving that she’s the best to ever lace up a pair of boots. So I don’t think either one is going to give up that opportunity without a pretty brutal fight.”

On AEW Rampage this Friday, Soho will wrestle Kris Statlander in the semi-finals of The Owen Hart Foundation Women’s Tournament. The winner of that match will meet Britt Baker, who defeated Toni Storm in a semi-finals match on Dynamite this week, in the tournament finals at Double Or Nothing.