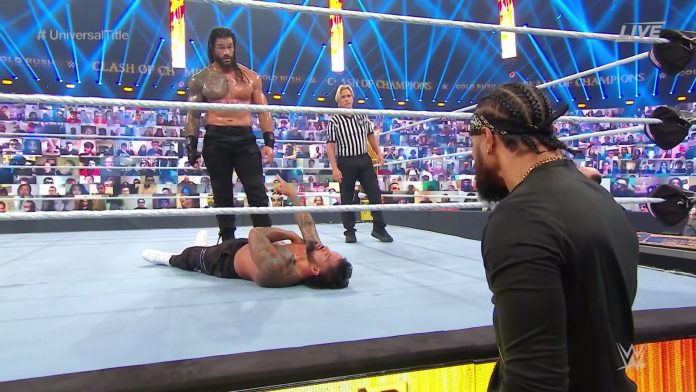 WWE Hell in a Cell is tonight, and it’s been a chaotic experience within the company while they prepare for the show.

Jimmy Uso returned to WWE television as part of his brother Jey’s feud with Roman Reigns, but Jimmy is still injured. His timetable for return is coming up as November to January is the target.

Rumors about the Usos potentially splitting have surfaced online, however those reports are not true. A tenured member of the creative team explicitly used the phrase: “fake news,” according to RingsideNews.

Roman Reigns’ storylines are concocted within a very tight circle apart from the traditional writing team. Paul Heyman, Vince McMahon, and Reigns are the only ones who know what is going to happen. We have also heard that Michael PS Hayes is “likely in that loop” along with whoever Roman Reigns is wrestling.

Jimmy Usos’ appearance at Clash Of Champions Gold Rush was a “total surprise” for many people backstage. The Amway Center provides a lot more places to hide people.

It is likely that fans will see Jimmy Uso at Hell in a Cell, but those plans are a closely guarded secret. He has been heavily factored into the build for Jey vs Roman II.