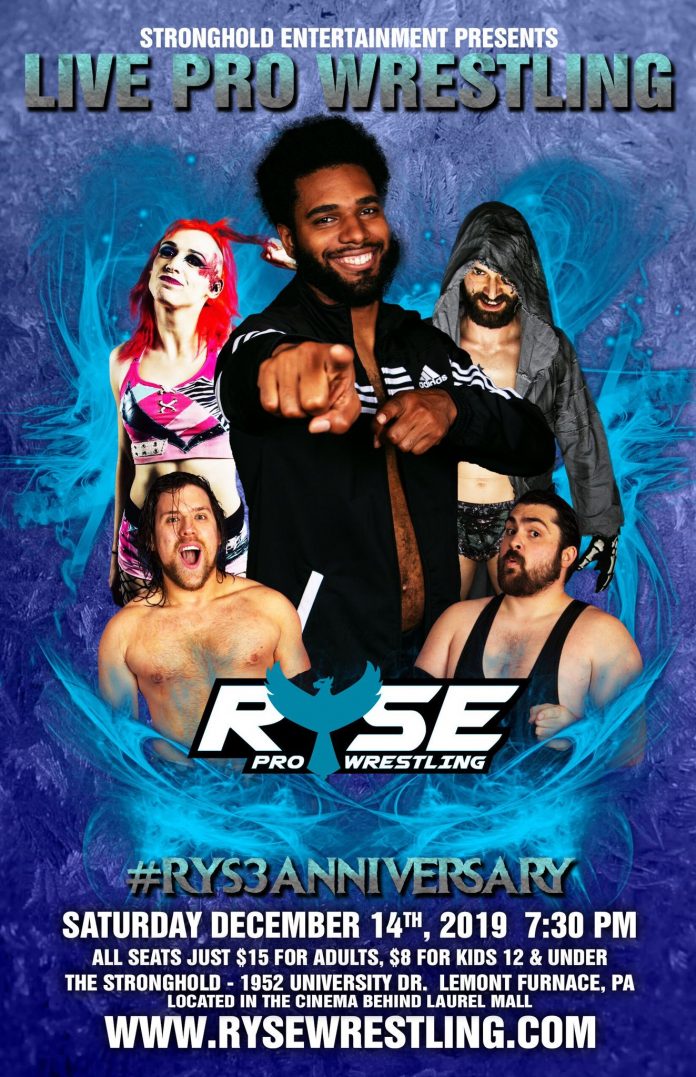 As my roller bag bumps along the pavement of the uneven parking lot, I approach the venue where pro wrestling is literally on the marquee, a converted cinema that hosts Ryse Wrestling in Lemont Furnace, PA. With my suit, energy drinks, and trusty comb in tow, I prepare for the night’s action, a showcase of some of the brightest talent around Pittsburgh, an area with an extensive history of sports entertainment, and a mixture of stellar talent from surrounding states. After the nearly 12 years I’ve spent in the wrestling business, 11 of those as a play-by-play announcer, I’ve seen many different sides of this crazy industry. During the past year and a half since my start with Ryse Wrestling, I’ve seen an overwhelming sense of positivity and optimism around the organization, an aspect that rejuvenated my batteries for the business.

This Saturday, Ryse Wrestling celebrates a special milestone with its third anniversary event, a culmination of countless hours of work put in by those in front of and behind the curtain. The Ryse project was launched in 2016 by veteran grappler, Brandon K, one of the most respected and accomplished figures in the history of the independent scene in the steel city. Brandon has shared the ring with many well-known stars, including Olympic gold medalist and Pittsburgh native, Kurt Angle, who trained alongside Brandon to keep his skills sharp prior to his debut on WWE TV. With over twenty years of in-ring experience, Brandon K knew that his time as a active wrestler was limited, but wanted to continue in the industry that he has a lifelong passion for, which sparked the concept of a promotion where young lions could make a new for themselves, as well as a place where aspiring hopefuls can learn their craft with a training academy run in conjunction with live events.

“I’m understanding that my wrestling career is in its twilight but I’m not ready to walk away from something that I’ve done passionately for 22 years now. Promoting would be the next natural step. I want to create a place that’s fun for the fans and the wrestlers alike. Hopefully, a place that stays out of the mud that has engulfed indy wrestling around here and keeps its focus on moving forward creating a wonderful product,” Brandon explained.

As mentioned, the enthusiasm for the promotion can be seen at all levels and brings a team effort atmosphere, as Brandon’s wife, Kristie is often seen in the front lobby greeting fans as the co-owner of the group. Even Brandon’s parents, who have cheered him on since the formative stages of his career as far back as 1997, get a chance to be involved in the group. The very polite Mrs. Clements manages the concession stand, serving fans Coca Cola, several types of snacks, and of course a theater staple, fresh popcorn.

As fans enter through the lobby, framed posters of past events decorate the walls and tables line the walls with merchandise. This highlights one of the most reward aspects of the live events, both for fans and the talent. The fans get a chance to meet some of the stellar athletes they support from the audience, with photo-ops and autographs a regular occurrence inside the building known to Pittsburgh fans as the Stronghold. Inside the theater, rows of chairs line the venue while the big screen plays highlight clips as a preview for that night’s event. However, the detailed planning and scheduling that goes into each event, as well as the promotional side of it behind the scenes, is just as critical to success as the quality product that Ryse delivers in the ring.

“When I first started I knew that the job would be the exhausting. What I wanted to build was to be the exact person I wanted or needed when I was just talent in the locker room. You start out with a lofty idea of how you can change things or do things better. What hits you much later on is that the only people that understand the pressures and responsibility are those that have done the job before. The most difficult thing is the pressure you put on yourself. Every empty seat feels like your responsibility. Lance Storm once said ‘you can make any excuse you want why people aren’t watching, if the booking is good enough they will show up.’ I live by that,” said Marcus Mann, the Ryse Event Coordinator that spent his first five years in the business as a manager at ringside with the goal to learn every facet of the industry that he could.

Over the course of the past three years, Ryse Wrestling has been a place for truly talented athletes from around the tri-state area and beyond to discover themselves, prompting them to excel to new levels as performers. Matt Conard, the current Ryse Grand Champion, is scheduled to defend his title against Tony Johnson this Saturday in the third anniversary feature presentation on the card. Both grapplers spent their early years honing their craft in West Virginia rings before Brandon K’s group gave them the opportunity to truly run with their talents, which propelled both to “must watch” status among the Pittsburgh scene. Lee Moriarty, who is almost unanimously considered the next breakout star from the steel city, is a former Ryse champion himself and continues to earn praise for his tremendous bouts that bring a mixture of several different styles into the squared circle. Derek Direction, who has made a name for himself in Absolute Intense Wrestling, has also been a standout performer in the organization, and one of several AIW talents to make the trip to Ryse. One of the most popular pairs in the company is The Mane Event, two incredible athletes, Ganon Jones Jr. and Duke Davis. While they are widely regarded as the best tag team in Pittsburgh, winning several tag titles previously and challenging for the Ryse tag titles this weekend, they recently made news on the industry’s biggest stage, as they were invited for a tryout at the WWE Performance Center just last weekend. Undoubtedly, Ryse Wrestling has become a place for talents to grow and a promotion that strives to give the fans their money’s worth for every live event.

“It’s a special place that deserves all the celebration,” Duke Davis commented.

As much as Ryse is built on the youth of the industry, a few carefully selected veterans provide a foundation that allows for guidance and advice for younger talent. For example, when I find myself in front of the mic at the commentary table just off to the left of the entrance way, I’m thankful to have the chance to broadcast for the great indywrestling.us crew (A tremendous production company that films and distributes content for many groups in the area) with Pittsburgh legend, Paul Atlas, a grappler that trained with Dominic DeNucci prior to a 25-year in-ring career. As I call the action and dodge an occasional flying wrestler, which somehow is an occupational hazard in this industry, Atlas adds his decades of knowledge to the broadcast.

“In my near twenty years, I’ve never experienced a locker room like Ryse. There’s always someone there watching, learning, and evolving. You have an amazing mix of talent that you won’t see together anywhere else,” said BC Steele, a performer known as the best manager in Pittsburgh.

With fresh talent and new match-ups always a part of the agenda in the organization, Ryse management looks to expand and add to its portfolio as the group transforms from an upstart promotion to a solid part of the fabric of Pittsburgh wrestling in 2020.

“As far as rewarding, it’s been watching a lot of talent break down walls, either personally or professionally. One of the big changes is the locker room has grown in their characters. While everyone works as hard as possible on their in ring craft, over time they have really developed a way to connect with the crowd. It has helped grow the brand into new territory for 2020. Next year we will see the company grow in new directions,” Marcus Mann said.

This Saturday will be the collaborative efforts of many, both in front of an behind the curtain to present a great event for the fans in attendance. Aside from its dedication to deliver a quality product for its fans, the Ryse organization is a shining example of what can be built with a team effort and a sense of enthusiasm from those involved, an aspect that isn’t often seen within the industry.

For more information about this weekend’s event, you can go to https://www.facebook.com/rysewrestling