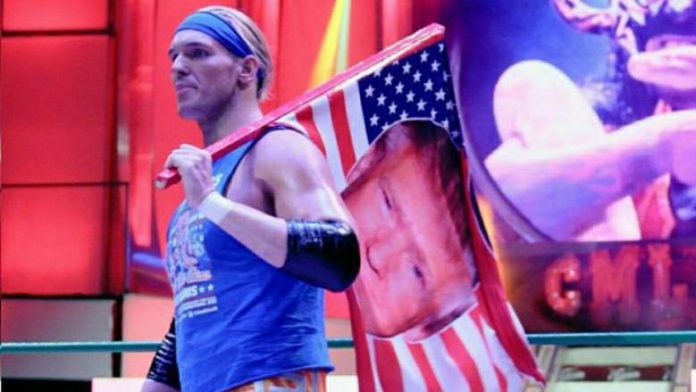 Sam Adonis recently spoke with The Two Man Power Trip of Wrestling on a number of wrestling topics. Here are the highlights:

“Honestly, people make it out to be more than it actually is and they want to call it a Donald Trump character or a Donald Trump gimmick and it is not any of those. I am basically just more abrasive of a heel than anybody else. I am just so cocky and out-landish that I am more or less finding it funny to rub it in your face. The people of Mexico hate it and I am so obnoxious and so mean that I say well if you hate Donald Trump , I am going to come to the ring with a flag and his face on it. That is kind of a mis-conception that people think I am trying to be like him and that I am trying to be a Republican supporter when really that is not it. I am just a classic and traditional villain and cocky, arrogant heel that I just take it to an extreme and I am just that much of a prick that I take advantage of a sour situation for the Mexican public.”

Deciding to put President Trump’s face on his flag:

“I waited to see the outcome of the election and I came out with an American flag when I wrestled in Europe for five years and playing the Foreign villain and having a big flag and having a 60,000 seat arena you are going to see his face a lot bigger on a flag than (airbrushed) on my tights. That is kind of the idea of how it came to be and it has been working for the past six or eight months.”

The mainstream media reaction and coverage he has received:

“I am surprised and it is not something I set out to do or expected at all. But I am definitely glad it has helped my exposure and it has helped me make some more money and it has opened a lot of doors that wouldn’t have been normally able to open. It was a right place at the right time and I am just really enjoying what has happened to me by just putting a picture on my tights.”

Being a throwback heel:

“That is what I live for. I cannot stand new wrestling because of things like that and because people don’t know what it is. People are so happy to use the excuse that “the business has changed and it’s evolved” and there is a reason the numbers are the way they are now and people aren’t die-hard involved in wrestling because wrestling is not cool like it used to be. People used to want to watch it and the masses were a part of wrestling and now the only part that really care are the “die-hard wrestling fans” and unless you create that drama and that genuine hatred people don’t really get emotionally invested. You need a struggle and you need a story and you need people to be booed and hated. Right now I love how Jinder Mahal is finally a heel that is hated and it is creating a feud and all these “smart” wrestling fans they don’t realize they are getting sucked in and there is a bad guy that they want to see lose and now they are buying tickets to watch him lose and they all think they are so smart and think I know how it is going and he doesn’t deserve to be there but it doesn’t matter why you don’t like him, you don’t like him and you are paying to watch him lose. That is what wrestling is missing and that is what we need and that is what I love being.”

“I may not have a big reputation on the Independents or your internet wrestling fan may not know who I am, however the last eight years I have been a full time pro wrestler and I haven’t had other jobs. I’ve been able to support myself and wrestled all over the world and I’m almost too busy being a wrestler to worry about my reputation in these internet wrestling companies.”

Not using the same last name as his brother, WWE’s Corey Graves:

“Yes it is definitely by design. It is a bit of respect for him because he’s put in his work and he’s done what he needed to do so I don’t want to discredit it by doing it my way and at the same time it is a bit of confidence on my part as well. I want to be able to say I never needed to use his name to get what I’ve got. I feel like I could probably be a bit further along as far as Independent name in the United States if I were to use his name, however I can honestly say as far as my exploits in Mexico he had nothing to do with anything. If I were to get back to the WWE one day and have a bigger run for myself there is not one person that can say he’s only done it because of his brother. Anybody who thinks that is just ill informed. So it is definitely by design and I think it has worked out for the both of us.”

Advice he’s received from his brother:

“There’s just so many. He’s been the one that anytime I need more or less mental decisions and anything that is behavioral or monetarily or anything that I need to know whether I’m in a contract dispute or need to cancel a booking and anything I’ve had like that he’s done first. He’s really been there for all of that stuff for me and that is kind of what I’ve learned from him.”

Does he want to make it back to the WWE after seeing the success he’s had all over the world:

“I was there about two years before NXT began. They were still doing NXT the reality show. They still wanted more of the football players and the athletes with experience outside of wrestling. I could have experienced at that point but I might have had the same outcome. Now luckily the right people are making the right decisions and the world experience guys are getting the opportunities. It is really helping my cause and like I’ve said and I don’t really want to come off too egotistical here but my bread and butter has never been being the flavor of the week indy. I’ve never traveled the world to go have the best matches and be the super-indy wrestling champion. My job has always been to sell tickets and to be main event, big time wrestling. That is almost something that most of those guys have no experience with. Not to take anything away from them but Dean Ambrose and Seth Rollins were on an Independent level before they got to WWE. Which is why I am a bit more confident that if I do have another opportunity I think the sky can be the limit because it is something of what I have grown to learn and what I’ve become good at is basically being a main event TV wrestler.”