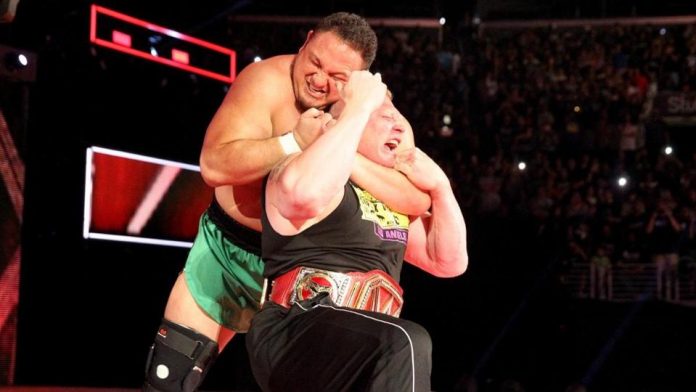 – Above is video of Samoa Joe backstage at WWE SummerSlam as he prepares to face Roman Reigns, Braun Strowman and WWE Universal Champion Brock Lesnar in the main event. Joe says he feels good and he’s ready to shock the world. He knows his opponents will do whatever it takes to win but what they’re willing to do doesn’t even come close to what he will do.

– Below is video of Big Show arriving to the Barclays Center for tonight’s match with Big Cass. Show is asked how his hand injury will hurt him in tonight’s match but he just stares at the camera and walks away. As noted, Enzo Amore will be suspended above the ring in a shark cage while Cass and Show do battle.

– Stephanie McMahon posted this photo of the SummerSlam logo being displayed on the Brooklyn Bridge after WWE NXT “Takeover: Brooklyn III” went off the air last night:

The #BrooklynBridge has never looked better! Thank you @barclayscenter and the LOC for bringing #SummerSlam back home.

The #BrooklynBridge has never looked better! Thank you @barclayscenter and the LOC for bringing #SummerSlam back home.