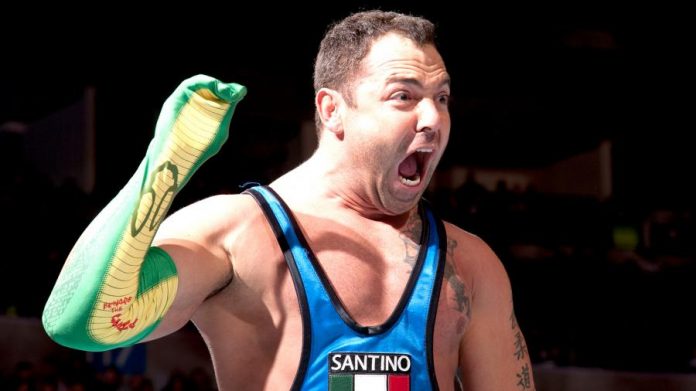 During it, he talked about his main debut in WWE on Raw during a live episode from Milan, Italy where he defeated the Intercontinental Champion Umaga. He would remain with the company until 2016.

“One day, I’m driving to Elizabethtown, KY, for an OVW house show, and I got this call. Vince had this idea for someone to come out of the audience in Italy because RAW was in Milan. He said, ‘Is there anybody in developmental that is Italian, an Italian heritage, somebody that can speak Italian?” It’s Bucci (Mike Bucci), and he said, ‘Your background is Italian, right.’ I said, ‘Yeah.’ He said, ‘Can you speak Italian?’ A month earlier, Dusty Rhodes called this guy Fearless Jack Boom. It was an hilarious gimmick of a past his prime, Evil Kneival, alcoholic. It was a really funny gimmick. Jack Boom thinks somebody is ribbing him doing a Dusty impersonation. He said, ‘Hello Jack Boom. Can you ride a motorcycle?’ He said, ‘No.’ Dusty said, ‘Ok, can you learn how to ride a motorcycle?’ He said, ‘No’, and that was the end of the conversation. He looked at his phone saw 203 and realized it was Dusty Rhodes.

Because Cody was in OVW at the time, Dusty came down to see the group of talent that was there. The story got brought up, and Dusty said, ‘If they ever call you and ask you if you can do anything, the answer is yes, and then you better go learn to ride a motorcycle like tomorrow.’ So when he called me and asked if I could speak Italian, I said, ‘Yes.’ I have a tourist Italian cassette. I used to play it in rush hour traffic, non-stop. It was basic Italian. I remember I regurgitated a couple of lines off the tape. I was on speaker phone. There was a group of writers. I actually said (in Italian), ‘I want to buy a half kilo of cheese.’ I guess it was enough to convince them that it sounded pretty good. I could hear them looking at each other saying, ‘I don’t know. It sounded like Italian.’ They said, ‘Ok, that’s great. We’re going to fly you tomorrow to Italy. You might debut on Monday Night RAW as this Italian guy.’ I went to Border’s and bought an 8 DVD pack of Italian. The entire flight, I was drinking coffee and trying to absorb as much Italian as I could. I got there.

As soon as I walked in the door, the production meeting was coming out. Arn Anderson was coming out the door. He has the papers. He said, ‘Well you’re having a good day kid. You’re winning the I.C. strap.’ Johnny Ace was there and said, ‘Vince wants to talk to you.’ I go and meet Vince. He told me this idea of this guy coming out of the audience. We went to meet Umaga and Bobby Lashley, who recognized me from OVW. Nice to see a friendly face. The show started. They brought me to my seat. It was the first segment I think, or maybe a couple segments in. When Vince’s music hit, they (the crowd) rushed the barricade and now I was six or seven people back. I thought he wouldn’t see me. Once he started talking, they filtered back to the seats. He introduced Umaga. They run up again, and now I’m eight people back. They slowly filtered back as security told them to go back to their seats. He issues the open challenge. He saw me and it worked out.”