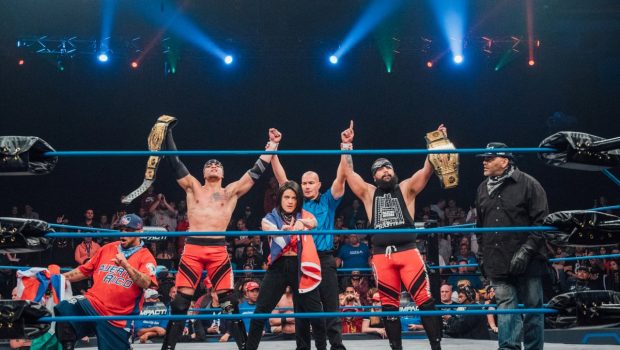 – As noted, The LAX will get their rematch from new Impact Global Tag Team Titles in a 5150 Street Fight, apparently at the November 5th Bound For Glory pay-per-view in Canada. Konnan and the rest of the group will explain what the match is all about on this Thursday’s Impact Wrestling episode. Impact announced the following on the segment:

They are one of the most nefarious and notorious factions in all of IMPACT, a trending topic when they returned and then all LAX did after that was win. They captured the IMPACT Tag Team Title and then the GFW Tag Team Titles and unified the championships. LAX was unstoppable.

Lead by Konnan, the team of Santana and Ortiz handled the business inside the ring and then it was Diamante and Homicide watching their backs outside the ring. LAX had it all. Then along came oVe, Dave and Jake Crist, the antithesis of everything LAX is and represents. LAX had their rivals and oVe captured gold.

Now, it seems these two teams are ready to rip each other limb from limb and Thursday night on IMPACT, LAX will explain what 5150 is all about. Will oVe respond? What will happen on a brand new IMPACT Thursday night?

– Below is another new promo with Johnny Impact discussing Bound For Glory. In regards to upping his game for the big event, Johnny says his game is always up, so up that he never looks down, but we can expect to see something different from him at BFG because every time he gets in the ring we see something different. Impact says he’s been thinking outside of the box in professional wrestling for 15 years and BFG will be no different as we should expect the unexpected. As noted, Johnny will face Garza Jr. on this week’s Impact Wrestling to determine the new #1 contender for Global Champion Eli Drake.

What will #JohnnyIMPACT have in store for everyone at #BFG2017? We asked him that very question. @TheRealMorrison now! pic.twitter.com/yauzfuexp9