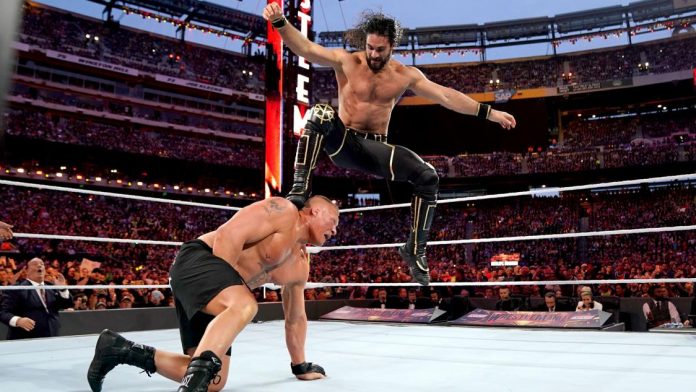 “The Beast” has been slayed.

With the WWE Universe firmly in his corner, Seth Rollins defeated Brock Lesnar to claim the Universal Championship, completing his quest to bring the coveted title home to Monday Night Raw.

Following Alexa Bliss’ WrestleMania surprise in the form of WWE Hall of Famer Hulk Hogan, Paul Heyman had a shocker of his own: Since Lesnar wasn’t in the main event, he arranged to have the Universal Championship Match kick off the night. This rescheduling would not only hasten Lesnar’s departure from MetLife Stadium but throw “The Architect” off his game.

Intent on mauling Rollins as quickly as possible, “The Beast” lunged at “The Architect” outside the ring before the match began, delivering an F-5 onto the floor and throwing Rollins around like a ragdoll, turning the challenger’s back several shades of purple.

“The Beast Incarnate”‘s dominance continued after the bell rang, but things turned when he tried and failed to hit an F-5.

Rollins countered and pushed Lesnar into the referee. With the referee unable to see the action, “The Architect” delivered a low blow.

Well… what did you expect from THE #BEASTSLAYER?!@WWERollins #WrestleMania pic.twitter.com/jBhfamNs5O

Sensing his opportunity, Rollins proceeded to use his Stomp finisher three times on Lesnar. That put “The Beast” down for good as the referee counted to three.