– As seen on Monday night’s WWE RAW from Los Angeles, Finn Balor teamed with The Hardys to defeat Elias Samson and RAW Tag Team Champions Cesaro & Sheamus in six-man action. In the Fallout video above, Balor and The Hardys talk with Charly Caruso after the win. Balor says he had 3 months of his training in Los Angeles and to be back in front of the LA crowd was special but to team with Team Extreme, guys he has looked up to for years, was an honor.

Jeff Hardy recalls his last match in LA, against CM Punk at SummerSlam 2009, but to come back to team with Balor & jam out to his music live was the best. Matt Hardy says the pleasure was all theirs and if there was a six-man title, they’d be after it. Matt channels some of his “Broken Hardy” gimmick and says the LA crowd was absolutely “delightful” but Monday night proved that they will “delete!” the next time they get Cesaro and Sheamus in a title match. All three are down to team together in the future.

– The dark main event after Monday night’s RAW from the Staples Center in LA saw Seth Rollins defeat Bray Wyatt. The match went around 10 minutes and was said to be both Superstars phoning it in, according to our correspondent. As noted, Rollins vs. Wyatt is now official for the July 9th WWE Great Balls of Fire pay-per-view.

– As noted, outspoken basketball dad LaVar Ball appeared with his sons on Monday night’s RAW for a MizTV segment with WWE Intercontinental Champion The Miz. 15 year old LaMelo Ball and 19 year old Lonzo Ball of the Los Angeles Lakers watched as their dad went back and forth on the mic with The Miz. We have video and photos from the segment at this link. As seen below, WWE posted a photo of the family to Instagram and Mr. Money In the Bank Baron Corbin replied with a shot at LaVar: 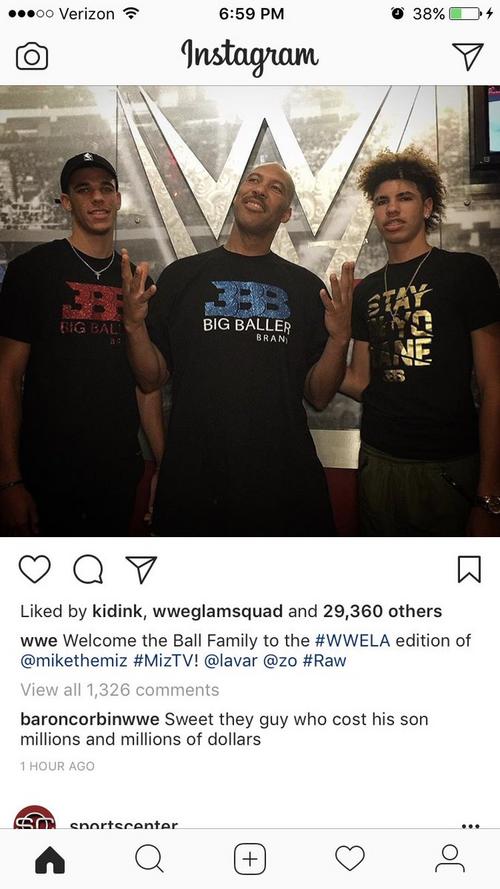