– Above is a promo for this week’s WWE SmackDown, featuring the return of SmackDown Commissioner Shane McMahon.

– In a correction from earlier, Austin Aries was not backstage at last night’s WWE TLC pay-per-view in Minneapolis. He indicated that he was backstage by posting a photo with new WWE Cruiserweight Champion Enzo Amore but he confirmed today that he was not at the show. Our original post has been updated.

– RAW General Manager Kurt Angle tweeted the following thanks to the WWE Universe for supporting him in last night’s ring return at TLC:

Thank you WWE Universe for a memorable night. #TLC #TheShield

– Asuka had this exchange with a fan after her main roster debut at last night’s TLC pay-per-view, which saw her defeat Emma:

That match was sloppy. Go back to NXT!!! You will not be used right on RAW. 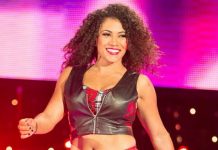