Former WWE NXT talent Shaul Guerrero is now taking bookings for wrestling, managing and ring announcing, via booking.shaulguerrero@gmail.com. Shaul’s husband, former WWE Superstar Aiden English, made the announcement via Twitter this weekend. They were engaged in December 2014, then married in January 2016.

Guerrero, who is the daughter of WWE Hall of Famer Eddie Guerrero and Vickie Guerrero, was known as Raquel Diaz during her NXT days. She first signed with WWE in October 2010 to work the FCW developmental territory, and became the longest-reigning FCW Divas Champion. She also became the Queen of FCW at one point. Guerrero would leave the company in September 2012, but return one year later. She then left the company again in April 2014 too deal with a ongoing eating disorder. Since her WWE run Guerrero has done some ring announcing for Lucha Underground and Reality of Wrestling, which is owned by WWE Hall of Famer Booker T. She also did some ring announcing for AEW earlier this year, during the “Deadly Draw” women’s tag team tournament. Guerrero has also done some burlesque performing since leaving WWE.

Shaul doesn’t tweet much but her latest tweet came in late August, reacting to the finals of the AEW tournament. You can see that post along with the new tweet from her husband below:

Yes’m – @Guerrero_Shaul is available for bookings 😍

This was such an incredible opportunity to announce for @AEWrestling thank you guys so much!!! MAJOR congrats to @RealIvelisse and @DiamanteLAX for winning the tag team tourney cup!!! https://t.co/AoKq1b1Umi 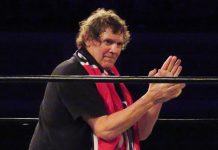