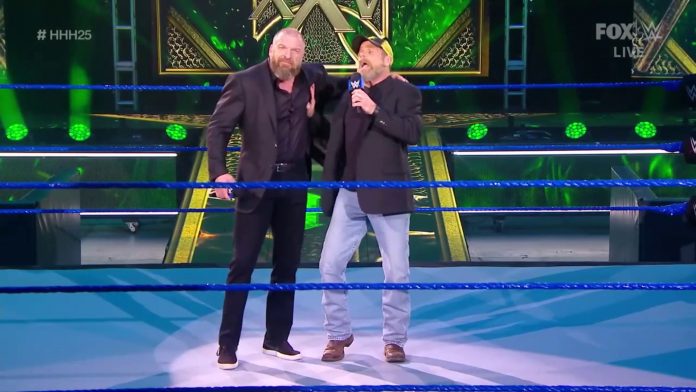 WWE Hall of Famers Shawn Michaels and Triple H recently spoke with Justin Barrasso of Sports Illustrated and discussed the current state of the NXT women’s division and the NXT Women’s Title, held by Charlotte Flair. Flair will defend in a Triple Threat against Io Shirai and Rhea Ripley at “Takeover: In Your House” this Sunday. Triple H was asked if the NXT Women’s Title is the most prestigious title in all of WWE. He said the title is one of the most meaningful titles in the pro wrestling industry.

“The NXT women’s title is one of the most meaningful ones in the business,” he said. “That is a testament to all the women who played a role in that. The women in NXT, they’ve got something to prove. They’re really going out of their way to make a name for themselves.”

Triple H continued to praise the NXT women’s division for how they constantly prove they belong.

“NXT is the place where people come when they have something to prove,” he said. “That’s been embedded in the women’s division since its creation. The floodgates opened with Charlotte, Becky, Sasha, Bayley, Paige and that entire crew, they took it to another level. Ever since, it’s moved up the line. There was a period of time a few years ago when those women all got called up to Raw and SmackDown, and it started over. The women in NXT have been hell bent on proving they belong.”

Michaels, who works behind-the-scenes with the NXT brands and at the WWE Performance Center, said he believes the NXT Women’s Title stands out in a business flooded with titles.

“There are no definites in this business, but I’d argue it’s pretty close,” Michaels said. “The women of the past helped develop this division, and it still operates at the highest level. I can still remember visiting NXT before I was working in the Performance Center, and I watched Sasha and Charlotte. I can remember watching a match and thinking, ‘My goodness, these two are incredible. If I were going to Monday Night Raw, I would want to steal all of that.’ I was just so impressed by what they were doing in the ring.”

Triple H added that the women in NXT have redefined the threshold level for compelling bbouts, helping the way women are seen as stars in the business. He also praised them as some of the hardest workers at the Performance Center as of late.

“This isn’t to negate the effort from our men because the guys work hard, but more often than not in the past few months at the Performance Center, the people I would see grinding, whether it was in the gym or the ring, were the women,” Triple H said. “I don’t mean sometimes, I mean always. The way the women work in NXT, it’s awe-inspiring to me. That work ethic, that desire to take it to a whole other level, they have something more to prove. There are big shoes to follow, so there is even more to prove now.”