In my opinion, the Boyhood Dream for Shawn Michaels began here when he challenged his former bodyguard and WWF Champion Diesel at Wrestlemania XI in Hartford, Connecticut. I know this event has the hype of the Lawrence Taylor vs. Bam Bam Bigelow match-up as well as the participation of other celebrities. I consider this match the second act of The Heartbreak Kid becoming WWF Champion. Nearly a year removed from the ladder match with Razor Ramon at Wrestlemania X, their rematch at Summerslam and then the split between himself and Diesel led to this feud. Diesel would break from Michaels and then go on to defeat Bob Backlund for the WWF Championship. Diesel was a good champion and waiting for him was his old friend HBK. Michaels would win the 1995 Royal Rumble in the famous number one entry to set up this match to prove who was the better man. I find that debatable and at Wrestlemania XI, I can show you why. 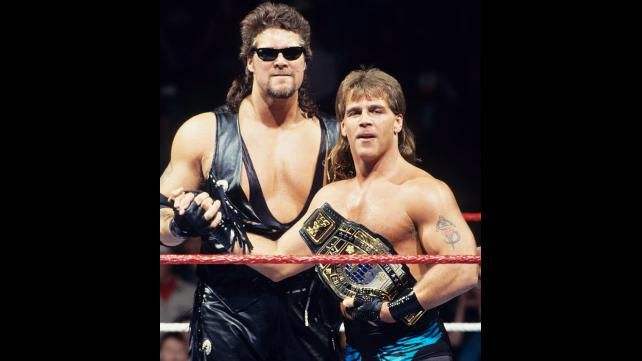 Celebrities galore would be involved with his match-up and in my opinion, take away from the real story. A young Jonathon Taylor Thomas would act as the timekeeper. Nicholas Turturro took over ring announcing for The Fink. Shawn Micahels made his way to the ring accompanied by Diesel’s replacement Sid Vicious and Jenny McCarthy. The Sexy Boy was ready to go and the announcers only wanted to focus on McCarthy and the whereabouts of Pam Anderson. I like beautiful women as much as the next man, or woman, but this match is a huge feud for the WWF Championship. I’d have liked it to have been treated as such. The Champ Diesel made his way to the ring by one upping Michaels by finding and bringing Anderson to the ring. Diesel looked and walked like a good champion and the pose with Anderson would sum it up before the match began. 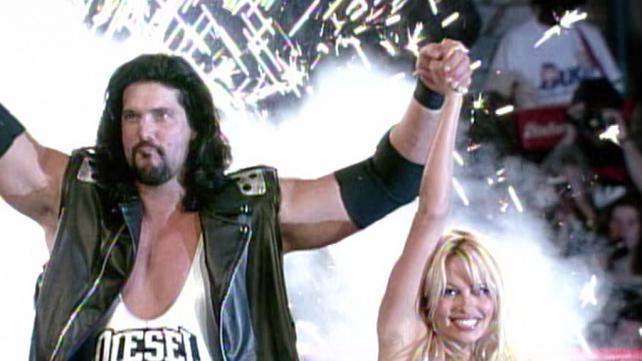 Immediately after the bell, Michaels was on Diesel. He used his speed and athleticism to duck and maneuver over the big man until he was caught with a furious shot with his right hand that sent Michaels flying around the ring. It was the power of Diesel against the speed of Michaels. Michaels would try to work on the arm, but Diesel would throw Michaels around the ring several times before Irish whipping HBK into the corner to spin him out of the ring. A distraction from Sid wouldn’t work and Michaels was caught again. They worked into the corner where the persistence of Michaels was matched by the power of Michaels. Diesel picked Michaels up high for all to see and Michaels tried to reverse it to take control, but a suplex and a running knee sent Michaels outside. Diesel had all the answers to Shawn Michaels questions to this point.

Michaels was able to slide under the ropes and Diesel’s expectations to throw a few punches and attempt a massive sunset flip. Diesel didn’t fall for it and pulled him up and onto the ropes where the sun don’t sun. Diesel used a whip and missed a huge big boot that Michaels used to his advantage as he clotheslined Diesel over the top rope and onto the outside. Michaels used his famous skin of the cat to get back into the ring before hitting a great crossbody onto Diesel from the top rope to the floor. Michaels kept the momentum with a baseball slide. He tried a second one, but was caught and paid for it with a mouth full of ring apron. He was able to duck a big elbow from Diesel that hit the ringpost instead of Michaels.

That shot really hurt Diesel and Michaels used it to his advantage. HBK hit a body slam from the ring apron to the floor. The crowd waited in anticipation as the champion had been seriously hurt. Sid argued with the official as Diesel made his way back into the ring. Michaels went straight to work on him. Michaels pounded on Big Daddy Cool and landed a huge bulldog from the second rope to wear the big man down. The Showstopper was in full control as the crowd chanted for Diesel. Michaels controlled them as well by hitting their favorite with a side elbow from the second rope and continued the ground and pound of Diesel with knees to the ribs. On the grandest stage of them all, Michaels would add to the highlight reel with a great flying elbow to the lower back. Michaels had the gold within his grasp. He couldn’t just taste it. He felt it’s weight around his waist.

The persistent champion would kick out and the match turned into the drive of both men and the need to be the better man. Diesel began to fight back with his power again. A pair of back bodydrops slowed Michaels down. Michaels stayed persistent and locked in a sleeper hold onto the champion. Michaels had Diesel beaten. He was within a few inches of capturing the title before the crowd erupted and Diesel found new life. He fought out of the hold and began to work on Michaels in the corner with elbows and a pair of running clotheslines in the corners were enough to shift the momentum. Diesel was back to good form and sent Michaels to the outside. 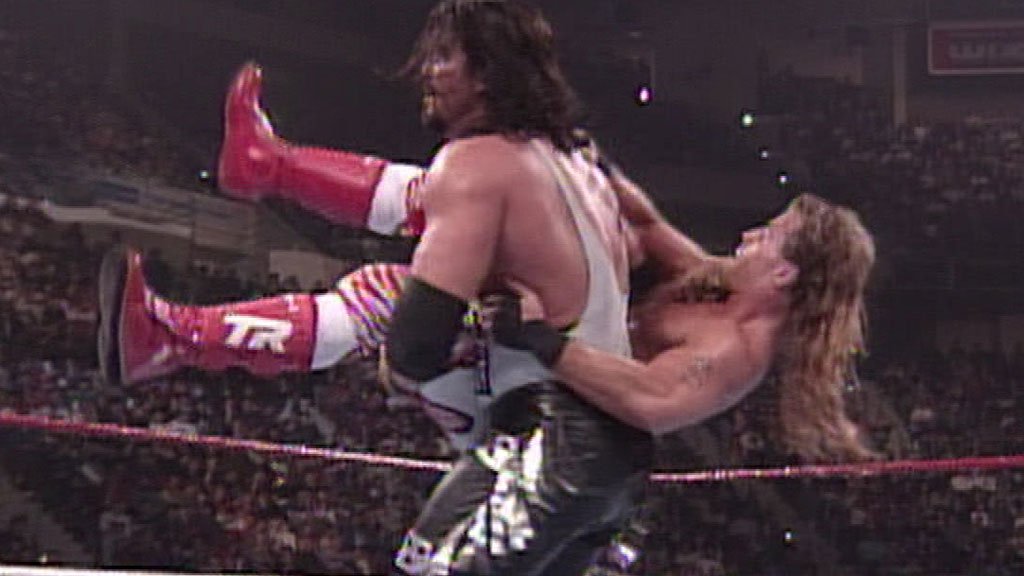 Diesel pounded on HBK back into the ring as Michaels ask for a moment of mercy. Diesel beat him back into the ring again. However, simultaneously the referee would fall off the apron trying to keep Sid away from the two men and Shawn Michaels hit Sweet Chin Music on Diesel in the center of the ring. Michaels had the match won, but the referee couldn’t count Diesel down in time and it was a long two before Diesel kicked out.

In reaction, Sid Vicious cut the top turnbuckle off the top rope. Michaels looked towards the end before a back body drop by Big Daddy Cool put both men down. Michaels got an arm over Diesel a few moments later for another long two count. Michaels needed one more big move. Michaels ascended to the second rope to dive into Diesel, but he was caught in a great feat of strength by Diesel and dropped with a sidewalk slam. The two exhausted men both made it to their feet. Diesel swept the leg of Michaels, catapulted him across the ring into the second turnbuckle and Diesel revved up for the end. He hit a few powerful shots onto HBK, hit a running big boot and dropped Michaels with the Jackknife Powerbomb for the three count. Diesel retained the WWF Championship and celebrated with all the celebrities while Shawn Michaels walked away with nothing.

The match was very good. Both guys really brought a physicality and it was great to watch Michaels slowly take the power away from Diesel and pound on him with his athleticism, until the end where Diesel built himself back up and secured the win. The story of Diesel rising up and defeating Shawn Michaels was a good and appropriate story for this Wrestlemania. Although a lot of the focus was on the celebrities, HBK and Diesel put on a very solid title match and in my opinion, the match of the night.

Where this match hits home for me is that this is the beginning of The Boyhood Dream. Michaels came about as close as someone could to capturing the championship and proved himself to be worthy of the championship and of the spot on the roster. His performance is what carried the match and the story of a year later will make up for everything that went wrong with this match-up for the character of Shawn Michaels. Michaels was ready for the gold and it was clear in this match that he would get it someday, but getting as close as he did put the fire inside of HBK that would burn for a solid year, until he would have to go beyond the distance against the excellence of execution to secure what he believed he had earned. For me, the story of the Boyhood Dream continues here. It began with Wrestlemania X and moved onto him nearly getting the championship, before earning the respect of the fans and the powers that be to give him the ultimate moment. Make no mistake, this match is very important in Shawn Michaels becoming Mr. Wrestlemania. It is the middle of the story between the emergence of Shawn Michaels and what we will talk about tomorrow.