– WWE posted this video of Shinsuke Nakamura, Sin Cara and Greg Hamilton sampling some of the local cuisine in Padova, Italy during the WWE tour last week.

– WWE announced today that they have a new channel on the Apple News app. Details are below:

For the very first time, WWE has an official channel on Apple News, featuring all of the latest breaking news, show results, match previews and exclusive interviews delivered right to your News app on iOS devices.

If you’re reading this on your iOS device right now, tap here to access WWE’s channel directly on Apple News.

2) Tap on the Search icon located on the bottom menu of the News app.

3) In the Search box, type “WWE” and look for the channel listed under Top Result.

4) When the WWE channel appears in search results, tap on the Heart icon located on the right side of the channel.

Once you’re following WWE’s channel, you will begin to see our top stories appear in the For You section. You can also access our latest content by visiting WWE’s channel in the Following section of your Apple News app.

It was a privilege to visit with the incredible team at @nyulangone’s NICU today! Doing incredible work to save babies lives! #Heroes pic.twitter.com/iXjSW7d8ee 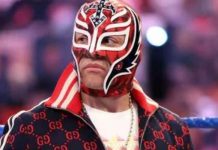