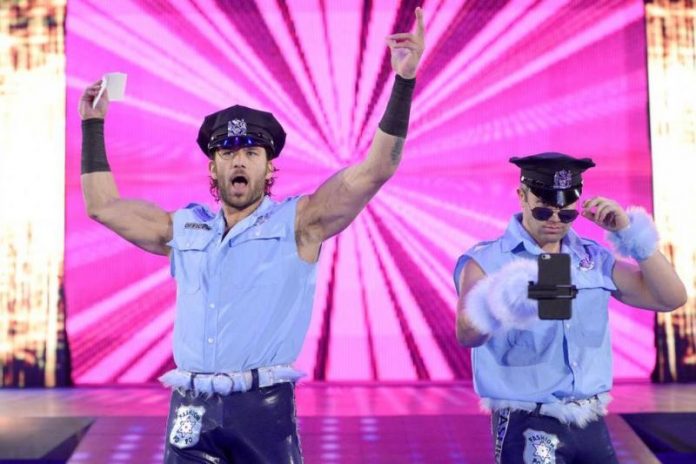 – The storyline on Breezango’s mystery attacker continued on Tuesday night’s WWE SmackDown from San Diego. Tyler Breeze and Fandango interrogated The Ascension but their office was once again destroyed while Konnor and Viktor were still in the interrogation room. The Ascension denied attacking Breezango a few weeks ago and said they were at Money In the Bank just to get a spot on the card. No word yet on who the attackers will be revealed to be but you can see last night’s “Fashion Files” segment above.

– No word yet on the full list of participants for next week’s Independence Day Battle Royal on SmackDown but WWE has confirmed AJ Styles for the match. As noted, the winner will go on to face WWE United States Champion Kevin Owens at WWE Battleground. WWE posted the following on the match and noted that some of SmackDown’s top competitors will compete in the match:

United States Champion Kevin Owens’ opponent for WWE Battleground on Sunday, July 23 will be determined next Tuesday in an Independence Day Battle Royal on SmackDown LIVE.

AJ Styles has made it clear in recent weeks that he is coming after Owens, as he wants to represent the United States as its champion. The New Face of America gloated that The Phenomenal One would never get to answer his open challenge because he doesn’t deserve it.

However, SmackDown LIVE General Manager Daniel Bryan, who saw things a little differently than Owens, expanded the list of potential challengers to Owens’ title, much to the chagrin of KO.

Now, some of SmackDown LIVE’s top competitors will face off in an over-the-top-rope melee for an opportunity at Owens’ prize. Can Styles earn the chance he’s been looking for, or will a new Superstar emerge from the pack to challenge the United States Champion? Find out on the July 4 edition of SmackDown LIVE at 8/7 C on USA Network!

– As noted, Adweek has recognized WWE Chief Brand Officer Stephanie McMahon as one of the 35 most powerful women in sports in their second-annual list. She also made the list in 2016. Triple H congratulated his wife on being honored with the following tweet:

Congratulations to @StephMcMahon and all these #PowerfulWomen who continue to revolutionize sports for all athletes. #Proud https://t.co/Uc7muKhyOu