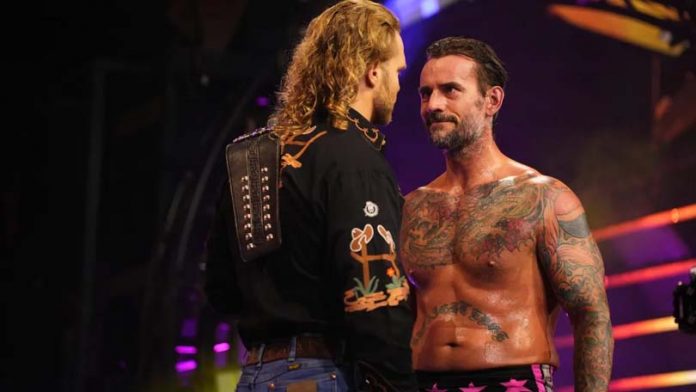 There was a verbal confrontation between World Champion Adam Page and challenger CM Punk on the May 25th, 2022 edition of AEW Dynamite. Page expressed his dislike for Punk and stated that he will be “defending AEW” against him at the Double or Nothing PPV.

Meltzer: “This was to me almost like and I’m not saying it was as good as this, but to me, it reminded me of when Bret Hart and Shawn Michaels in 1997 did a face-to-face, it was probably designed like this, ‘the more you know, the more it meant.’ When Bret and Shawn did that stuff, I knew everything was going on… backstage. I remember watching this going like, ‘holy sh**.’ It’s not like they’re shooting, but there’s a level of reality to this that the people watching on television do not know. This had the same vibe to it.”

Alvarez: “I mean I didn’t write it down, but I mean he essentially said that this CM Punk that’s a nice guy out here on television and a new CM Punk allegedly, he’s a piece of sh** backstage. That’s essentially what he said…. Page also made the comment that he wasn’t going to beat your a** this weekend for myself or this championship, but I’m going to beat your a** for this locker room.”

You can listen to the show below: