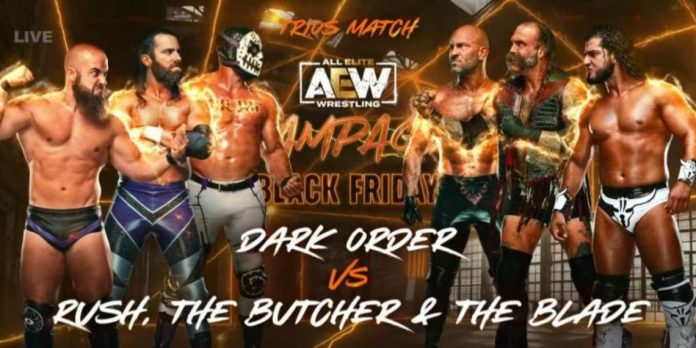 This week’s Black Friday edition of AEW Rampage on TNT, which begins at 4 p.m. ET, will feature a major heel turn.

Rush, The Butcher, and The Blade defeated The Dark Order on Wednesday night’s tapings. The Dark Order was represented by Alex Reynolds and John Silver at the start of the match, but 10 later joined them and turned on Silver. Rush then pinned Silver for the victory.

10 then attacked Evil Uno and knocked him out, after which he unmasked Uno while an upset -1 watched from the stage. Later, 10 and Rush worked together to put Reynolds through a table at ringside from the apron. After confronting -10, 10 threw the mask down at his feet, effectively ending the show.

Silver, Reynolds, and Uno, plus -1 or Brodie Lee Jr., are the only wrestlers left in the Dark Order. Alan Angels left when he was released by AEW in late June, and Colt Cabana hasn’t been with the faction since the spring. When Stu Grayson was released on May 2, he left the stable, but he later made a special one-night appearance on the October 14 Rampage. Brodie Lee, the group’s leader, died tragically on December 26, 2020, at the age of 41.

There’s no word yet on what AEW has in store for 10 or The Dark Order in the future, but we’ll keep you posted.

You can click here for full Rampage spoilers to air on Friday in a special start time.