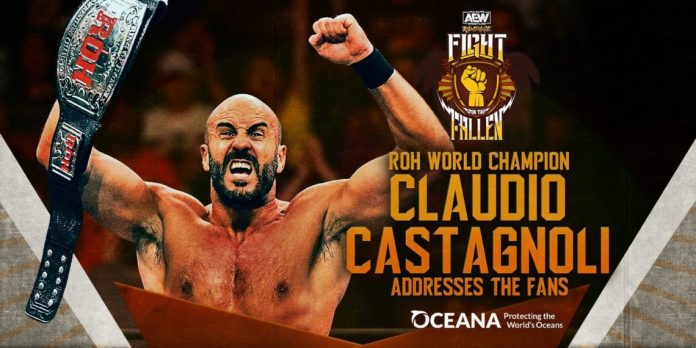 * Orange Cassidy, Chuck Taylor and Trent Beretta defeated Sonjay Dutt, Jay Lethal and Satnam Singh. Cassidy pinned Dutt with the Orange Crush to win. After the match, Cassidy was attacked by Lethal and Singh until AEW TNT Champion Wardlow made the save. Dutt ordered Lethal and Singh to exit the ring

* New ROH World Champion Claudio Castagnoli was interviewed by Tony Schiavone in the ring. Fans gave Claudio a standing ovation and chanted “you deserve it!” to start. Claudio thanked the fans in multiple languages, and said while he doubted himself at times, the fans never let him down and supported him as he fought to get where he wanted to be. Claudio brought out ROH Pure Champion Wheeler Yuta but Chris Jericho, who was on commentary, interrupted and said he was sick of them. Jericho said a sports entertainer beats a pro wrestler every time. Yuta told Jericho to shut up, then reminded him of how he retained his title over Daniel Garcia. Yuta said he knows he can also beat Jericho. They had a back & forth on the mic until Jericho suggested they fight on Dynamite next week. Wheeler denied the challenge, and said he already knows he can beat Jericho. Jericho offered to put up his title shot against Interim AEW World Champion Jon Moxley on Wednesday, and said Yuta can have it if he beats Jericho. Yuta mocked Jericho and said that was easier than he expected, then agreed to the match