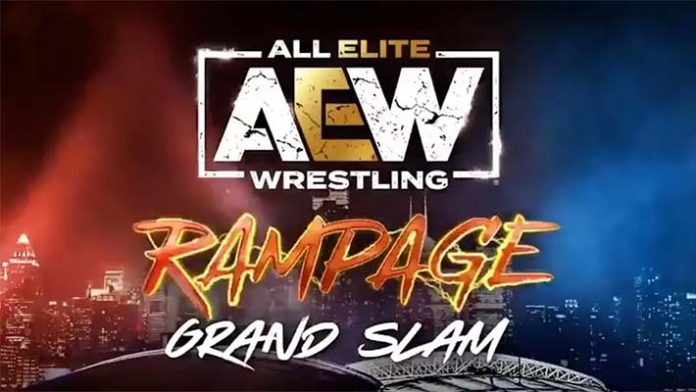 * It was announced that the Grand Slam golden ticket battle royal for tonight will be 25 participants and the winner gets a AEW championship match at the first Tuesday Dynamite on 10/18.

* No DQ Match: Sting and Darby Allin defeat Brody King and Buddy Matthews (w/Julia Hart): Sting and Darby attacked House Of Black on their entrance and it became an all out war. Sting went off the top rope through a table, but no one was home. House of Black then handcuffed Sting, which took a while, but then they turned their attention to Darby. Darby did a Coffin Drop onto a standing Buddy Matthews off of the entrance way, then Brody and Darby went crashing off the stage into tables. Buddy was about to hit a still handcuffed Sting with his bat before the lights went out and came back on to the music of The Great Muta, who spit mist in the face of Buddy, which caused him to knock Julia Hart through a table. Sting picked up the win for his team and hugged Muta after.

* HOOK and Action Bronson vs. Matt Menard and Angelo Parker: Action Bronson rapped his team out to the ring. Bronson got some offense in off of a hot tag with shoulder tackles, a corner splash and clotheslines, HOOK came in and then finished the match off with a double Redrum.

* Samoa Joe and Wardlow defeat Tony Nese and Josh Woods (w/ Smart Mark Sterling): Smart Mark cut a promo before the match on Samoa Joe and Wardlow before they came out. Then, this was a pretty easy victory for Joe and Wardlow as they dominated Nese and Woods. Joe pinned Nese but after the match, they attacked Joe. Wardlow came in to make the save but Mark Sterling attacked Wardlow, which didn’t go so well. Wardlow power bombed Mark twice, then Joe got him up and threw him into Wardlow for a third and final power bomb.

* Jungle Boy defeats Rey Fenix: Jungle Boy and Rey Fenix had an incredible back and forth match which Jungle Boy won with a roll up. After the match, Christian Cage returned sporting a sling. Luchasaurus attacked Jungle Boy from behind. Christian cuts a promo and says Luchasaurus is his right hand of destruction. Luchasaurus Power-Bombs Jungle Boy to end the segment.

* Backstage segment with J.A.S. There will be a appreciation event held on next week’s Dynamite.

* Sammy Guevara defeats Eddie Kingston: Sammy Guevara cut a promo before the match saying he’s sorry… sorry he didn’t call Eddie a “fat piece of shit” sooner. Sammy hurt Eddie on the outside then did snow angels in the ring. Eddie hit Sammy with three back fists and then submitted Sammy for the win. But, he wouldn’t let go of the hold so the ref over turned the match and Sammy is the winner. After the match, Eddie wanted to destroy the ref but beat up the security.

* Paul Wight is out on commentary for the next match.

What. The. Heck. The Great Muta appeared on the #AEWRampage taping. Good LORD!!!! #aew pic.twitter.com/zRKkoDsS5r