On Saturday night, Impact Wrestling returned to Cicero Stadium in Chicago, Illinois, to tape their upcoming batch of television episodes for their show on AXS. Here are the complete results from the tapings, courtesy of Impact Asylum:

Before the Impact Taping

– Honor No More surrounds the ring and beats up Heath, but again there are issues with Eddie Edwards ordering PCO to attack and PCO hesitating. Heath takes advantage by taking out one of the others and flees. Edwards stands on the top rope to yell at Heath in the crowd. PCO behind him clearly thinking about doing something but not yet.

– Hawkins confronts Gujja. He offers him his title rematch immediately and cheap shots. Referee Armstrong refuses to treat it like a match until Hawkins bullies him.Gujja gets in his own shot and pins Hawkins for three. Gujja eventually leaves with the Digital Media belt.

– Eddie Edwards talks up their impending title match and tries to sell Alexander on the idea of being allies. Heath jumps Edwards from behind before Alexander has a chance to react. 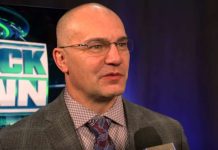