On October 30th, MLW Fightland ‘22 rolled into Philadelphia at the 2300 arena.

The matches were taped for future episodes of MLW Fusion.

Here are the full results courtesy of PWInsider: 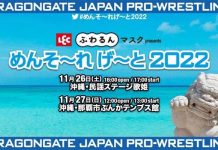