Ring of Honor held a TV taping on Saturday night in Las Vegas, Nevada Sam’s Town Hotel and Gambling Hall and here are the results, courtesy of ROHWorld.com:

– Kenny King and Silas Young brawled at ringside. It was announced that they will meet in a Last Man Standing match at Supercard of Honor.

– Bully Ray announced SoCal Uncensored vs. The Young Bucks and Flip Gordon in a ladder match for SuperCard of Honor.

– Cheeseburger and Kikutaro fought to a no contest when The Dawgs interfered.

– Cody and Kenny Omega took part in a verbal exchange. They brawled and were pulled apart by Bullet Club. Cody shoved Matt Jackson into Omega and ran off. Omega and the Bucks teased fighting.

– Matt Taven defeated Christopher Daniels and Cody in a three-way. Cody was accompanied by Bernard the Business Bear. Taven stole the pin from Cody to win the match. 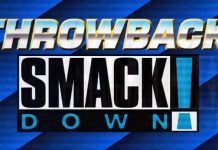