Ryback defeated Tyson Kidd. Both men were booed during their entrances. Tyson was defeated by pinfall following a spear from Ryback.

A video recapped the Johnny Curtis and Derrick Bateman feud and teased the wedding.

Michael Cole was brought out for the 100th episode.

Titus O’Neil defeated Darren Young in a no DQ match. Titus dominated the whole match with slams outside the ring and assorted power moves. Darren took the advantage after a reversed suplex, and hit his signature, but Titus kicked out. When Darren tried his signature again, Titus countered with his and pinned Darren.

Titus grabbed the mic and thanked the crowd for nothing. He proceeded to gain heat as he went on a tirade about his useless fans and pro, Hornswoggle. He was booed out of the arena.

A Royal Rumble promo was shown.

Percy Watson pinned Heath Slater. This was billed as an alumni match. Following some forgettable action, Percy scored the pin.

Curt Hawkins and Tyler Reks defeated Yoshi Tatsu and Trent Barreta. Hawkins used his cane on Barreta, which led to the pin.

The Johnny Curtis and Maxine wedding started off with a mediocre Elvis impersonation. Curtis entered in a leather jacket and tuxedo shirt. Derrick interrupted and revealed he was not the one behind the email, but Curtis was. The two brawled over Maxine as the crowd got a pretzel. Maxine held him and Derrick ended the fight. The two kissed and NXT ended. 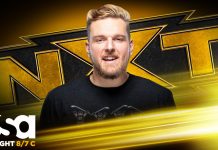