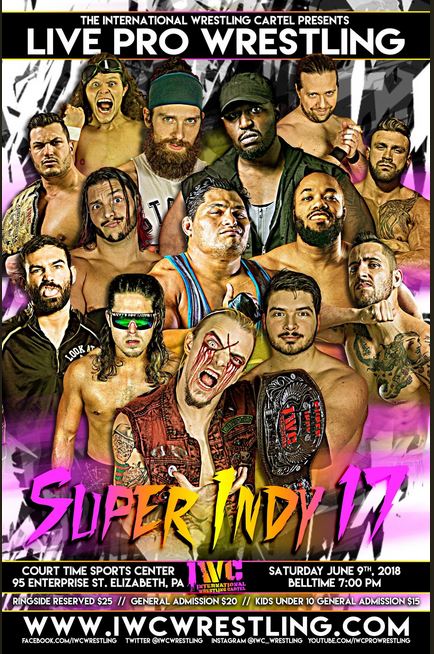 As independent wrestling changed along with the rest of the industry during the past decade, new stars and ways of distribution played a critical role in how fans consumed the product. While new influences replaced traditions of the past, some aspects of the indy scene remained notable benchmarks of the circuit. The ECWA’s Super 8 tournament doesn’t hold as much prestigious as it did during its initial years because it was more the names involved that made the tournament as opposed to the tournament that made the names. However, an event such as The Battle of Los Angeles, a stable of the Pro Wrestling Guerrilla calendar, remains a highly anticipated event on the west coast.

#IWCSI17 is getting closer! Can we top last year? Tickets and info at https://t.co/XIdyXKkKu2! pic.twitter.com/KuirbNjbhs

Locally and for much of the independent scene on the east coast, the International Wrestling Cartel’s Super Indy tournament, a collection of top-tier talent from various places, is considered by many to be one of the most prestigious events in the storied history of the Pittsburgh area. The IWC is known for its mixture of outside talent, occasional legends, and a solid group of local stars. Local competitors that made a name for themselves under the IWC banner include DJ Z and Elias. With seventeen years of history, the IWC was promoted for several years by Norm Connors, who is one of the godfathers of independent wrestling in the region. Involved as a manager before his ownership of the original Steel City Wrestling prior to IWC, “Notorious” Norm spent over 15 years in the business before he retired from the industry in 2009. Under the direction of Connors, the Super Indy tournament showcased the early skills of stars that would go on to make a major impact in the direction of the sport. Names like AJ Styles, CM Punk, Low Ki, Chris Sabin, Chris Hero, Colt Cabana, Johnny Gargano, and many others showcased their skills in their formative years before they went on to mainstream and international success.

Quite simply, Super Indy became known as a place for talented athletes to make a name for themselves and elevate their profile on the independent circuit.

After Connor’s retirement, ownership shifted until eventually, Justin Plummer, who previously worked as an on-camera host for the group, purchased the organization in 2014.

“It was exciting, but unexpected. I learned earlier in the year that Chuck Roberts would be stepping down and I didn’t want to see the premiere promotion in Western PA might disappear. So, I stepped up and offered to buy the company to keep the legacy alive,” Plummer explained.

This weekend’s seventeenth edition of the eight-man tournament provides yet another combination of top locals and national talent. Once again, the stage is set for those on the card to have a standout performance. Jaxon Argos, a loud-mouthed student of the underrated legend Lance Storm, will continue his rivalry with rising star, Johnathan Gresham in the first round. Argos is known as much for his outrageous antics as he is for his wrestling, but still provides an entertaining performance. Gresham is an athlete that has completed more regularly with Ring Of Honor in recent months, and I’d say that he has the talent to really make a name for himself if he’s given a continuous platform. The Super Indy tournament could be a career making night for him.

Another opening round contest puts the eccentric Joey Janela against Impact Wrestling’s Ethan Page. Janela is a wild card and it seems like there’s no risk that he’s not willing to take so you just don’t know what to expect from this bout. Janela was tossed from a two-story building a few years ago, and also wrestled Japanese legend, The Great Sasuke during Wrestlemania weekend earlier this year. Despite the national TV exposure, Page is another one that could make a run in the tournament to further establish himself, specifically because I think Impact has yet to see what he brings to the table.

The third quarter final match features the current Super Indy champion, Gory defending his championship throughout the brackets, and will square off against Anthony Henry. Gory is a dynamic aerial competitor that made his name in Pittsburgh with a series of stellar matches against DJ Z early in their respective careers. For some reason, Gory has yet to break out on a national stage, but he’s undoubtedly one of the hidden gems of the area that certainly has the skills to do so. Henry is similar to Gory, in terms of his impressive resume in recent years working with Evolve and other well-known groups, but he still needs that platform to get the exposure his skills deserve. Considering that streaming is becoming more of a standard within the entire sport, it could simply be a matter of time before Gory or Henry get more publicity. Perhaps, Super Indy could be the stage for them.

The final opening round bout features two well known stars of the independent world. David Starr, a six-year pro, has already worked for nearly every major organization in the United States, as well as international tours. If Starr is victorious in the tournament, it brings a new dynamic to the Pittsburgh area if he returns as a regular for IWC. His opponent, Jeff Cobb is a former Olympian and a mainstay on the indys, competing as far away as PWG and around the world for New Japan Pro Wrestling. His Pittsburgh debut is very anticipated, as his feats of strength thrilled crowds. The only downside of this match-up is that one of them will be eliminated and only compete once that night.

Who advances and ultimately wins remains to be seen, but there’s certainly a noticeable amount of buzz ahead of this event.

“It’s going to be very difficult to top last year’s Super Indy, which saw a record crowd for that particular venue. But we are bringing in the best up and coming stars from across the country to come together for one night, 7 dream matches, and a lot of surprises in hopes we can recapture last year. We are going to swing for the fences on Saturday,” Plummer exclaimed.

“The Super Indy tournament shows that Pittsburgh has some of the best home grown talent around,” veteran manager, BC Steele said.

No one in Pittsburgh knows what Shane Taylor can do more than Jack Pollock.

The story goes he left bloodied and beaten but I’m the man who slammed Shane Taylor, the man who pinned him…more than once.

A non-tournament match also garnered much hype prior to the event, as Ring Of Honor star, Shane Taylor, who worked Pittsburgh prior to his time on national television, faces off with an old rival Jack Pollock. Shane’s tremendous agility is showcased regularly on TV and pay-per-view, while Pollock is another that I would describe as a hidden gem of the area. Pollock learned under Lance Storm in Calgary and is one of the best well-rounded wrestlers on the roster. Pollock and Taylor has a brutal series of matches prior to Shane’s full-time ROH contract, and as someone that did commentary for those bouts, I can tell you that Taylor vs. Pollock will deliver a hard-hitting, physical match.

For more information, you can go to www.iwcwrestling.com