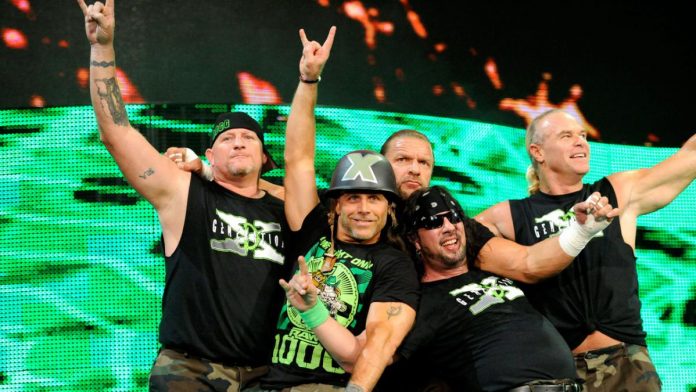 – Above is behind-the-scenes video from a new photo shoot with various WWE Superstars celebrating 20 years of D-Generation X. Sasha Banks, Bayley, SmackDown Tag Team Champions The New Day, Jason Jordan and Breezango pay tribute to DX. As noted, the debut series of “Flashback Friday” programming on the WWE Network will begin at 3pm EST tomorrow and will focus on 20 years of the group. Part 2 will air as next week’s “Flashback Friday” series of programming.

– Paul Heyman has launched a new Instagram account at @PaulHeyman but no posts have been published as of this writing. The bio reads, “Ladies and Gentlemen, My Name is Paul Heyman. Advocate for Brock Lesnar. This is my official IG and home for Heyman Hustle and Looking4Larry Agency.”

– We now know that Charlotte Flair’s trip to Shenzhen, China earlier this week was for the announcement of the WWE Network finally launching in the country, just in time for SummerSlam. Below is a video of Charlotte announcing the launch to the fans of China, along with photos of the WWE China team from her Twitter and Instagram:

WOOOOOO! @WWENetwork is going to be available in China beginning August 18, and @MsCharlotteWWE couldn't be more excited about it… pic.twitter.com/0pOpRbfPfm