The King’s of Wrestling claim they are the best tag team in the world today. Their track record may prove their claims correct as Chris Hero and Claudio Castagnoli have developed into one of the most credible tag teams anywhere and currently hold the ROH World Tag Team Championships.

Despite appearances, Christopher Daniels and Davey Richards actually have a lot in common. They both feel they are the uncrowned ROH World Champion and each individual believes he represents the best in ROH today.

The claims of all four men will be put to the test inside the Montgomery County Fairground on October 15th when ROH returns to Dayton, OH as the ROH World Tag Team Titles will be on the line! The Kings of Wrestling, with Shane Hagadorn in their corner, will face Davey Richards and Christopher Daniels in a 1st time ever match! The question is how and why Richards & Daniels were selected to challenge for the belts?

ROH officials elected to team the two top contenders for the ROH World Title together for a special dream tag team match. As both Daniels and Richards are former ROH World Tag Champions, it is obvious they have the credentials to challenge for the belts. Factor in the KoW’s constant claims to being the greatest tag team in history, and ROH officials felt it was appropriate to put Hero & Claudio to the test. Add in the impending singles match between Davey & Daniels the next night in Chicago Ridge, and the intrigue to this championship bout only rises.

Richards and Daniels have a huge opportunity here; even without ever forming a team, each man is good enough to pin either Claudio or Hero at any given time. If Daniels and Richards win this tag match via pinfall or submission, they will become the new champions together, but they will not head into Chicago Ridge as a team. In the Frontier Fieldhouse they will finally face each other after six months, despite carrying the tag team gold as a unit.

However, The Kings of Wrestling have been on fire recently with huge wins over Haas and Benjamin, Generico and Cabana, as well as being the sole survivors at Ultimate Endurance after going against three other teams. They have been making giant waves lately and they have no plans on slowing down.

Every individual involved in this championship bout is an incredibly impressive athlete carrying a desire to be the best. On October 15th ROH returns to Dayton, OH and we are bringing with us the biggest Tag Team Championship match that was possible. Get your tickets now for ROH’s return to Dayton, OH: http://www.rohwrestling.com/store.php?sec=prod&prod=295. 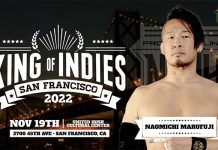 Naomichi Marufuji Headed to King of the Indies 2022 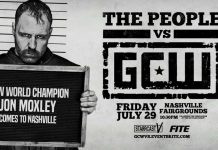 Confirmed for Tonight’s The People vs GCW Event