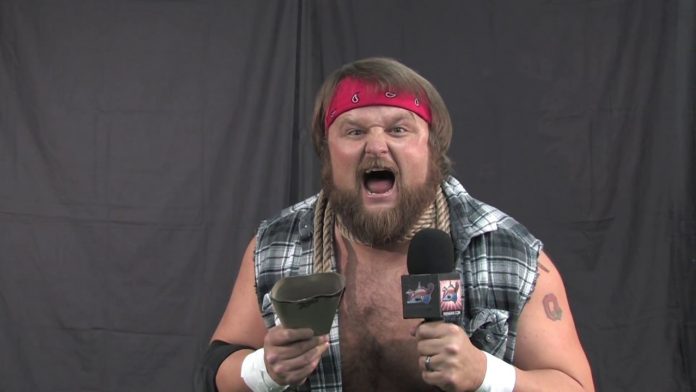 Remember VHS tapes? Those clunky bricks that were put into a VCR and had to be rewound before they were returned to the video store or there would be the dreaded $1 rewind fee? For many diehard pro wrestling fans, that bulky form of media will always be special, regardless of the advancements in technology of DVD, Blu-Ray, and now online streaming of sports entertainment content. It might be something as simple as taping a live pay-per-view over an episode of the Golden Girls or as savvy as using two VCRs to bootleg obscure Japanese wrestling footage, but the VHS format played a major role for fans.

In some scenarios, it can also play a big factor for professional wrestlers as well. Long before the grappler known as Jock Samson laced his boots, buttoned his satin jacket, or secured his cowboy hat to go to the ring, he was just a youngster wandering around a video store in the late-80s. Among the aisles of snacks for sale and movies for rent, he found himself staring at the cover of a VHS that had two mammoths ready to face off. No, it wasn’t one of the countless films from the classic Godzilla franchise, it was a shot of the marquee match of Wrestlemania III, Hulk Hogan vs. the legendary Andre The Giant. The two larger-than-life figures memorized him.

A few decades later, Jock Samson is known as one of the loudest, rowdiest, and most entertaining figures in his tri-state area. A self-described “redneck,” Jock brings a combination of a brash persona and a gritty in-ring style that makes him standout from the current wave of independent competitors.

“I grew up enjoying wrestlers personas, their characters, and how they expressed they themselves. I loved watching guys like Hogan, Piper, Flair, and Dusty talk people into the buildings. I never cared if they were any good in ring or what their work rate was, I only wanted them to talk trash. Talking trash is my favorite thing to do in my life,” Jock said while he sipped a beer in his backyard. “I talk trash to everybody my wife, neighbors, or friends. It’s funny that people don’t cut as many promos as they used too. They’d rather do a bunch of flips than talk folks into the seats”

With infuriating the crowd one of his specialties, Samson made it a habit over the course of his 15-year career to pay attention to the details of a live audience in order to ensure the biggest reaction during the in-ring action of his match, something he considers somewhat of a lost art within modern wrestling.

“Each crowd is different and wants different things. You need to listen to the crowd and decide how you’ll approach your match that certain evening,” he explained.


A native of a small town in south eastern Ohio, Jock doesn’t look to be anything other than himself when he steps into the ring ropes, citing that it’s much easier for him to perform as the salt of the earth guy he actually is than to attempt to present something too over-the-top when he walks through the curtain. With solid in-ring technique and the ability to draw jeers from the audience on the mic, Jock has zigzagged across the Buckeye state and into neighboring states to bring his unique of rural wrestling to different cities. One such place is the International Wrestling Cartel, one of the longest running organizations in the Pittsburgh area. Originally promoted by one of the godfathers of professional wrestling in the steel city, Norm Connors, the IWC is now owned by Justin Plummer, who more recently brought events to a drive-in just outside of the city so that fans can safely watch the action in their cars while audio is piped through the speaker system. One of the featured stars of that organization, Jock antagonizes Plummer as a part of The Regulators, a group consisting of talented grapplers, Chris LeRusso, Dan Murphy, and David Lawless as the stable looks to make sure that the promotion follows all the local rules for running events during the pandemic era. Jock, being the true heel that he is, claims he plans to win the IWC championship and take it to the capital building in Pennsylvania to deliver it to the desk of Governor Tom Wolfe.


“We have a group of some the most under utilized guys in all of wrestling in Western, PA. Each and every one of my guys are as talented, if not more, than anybody around,” Jock said of his stablemates.

With memories like his favorite match of his career being a bull rope match against The Duke in his home state of Ohio, an homage to the previously mentioned Dusty Rhodes, and the chance to share the ring with “Hacksaw” Jim Duggan, another one of his favorites, Samson still lives a relatively simple life, both inside and outside of the wrestling business. When he’s not lounging in his pool or watching classic wrestling footage, an occasional social media clip will show him arguing with wife his Linda about a variety of household tasks. But, even Jock has a soft side, as one of the only things he enjoys more than wrestling is spending time with his 6-year-old daughter, Scarlet. Despite countless matches in front of countless audiences, Jock Samson keeps his goals simple.

Jock Samson isn’t eloquent with words or a connoisseur of lucha libre, but his goal each match is to entertain those that put their hard-earned money down for a ticket to a professional wrestling event. Regardless of he incites cheers or jeers from those in attendance, Jock looks to generate an emotional from the audience, the same way that VHS cover resonated with him all those years ago at the video store.