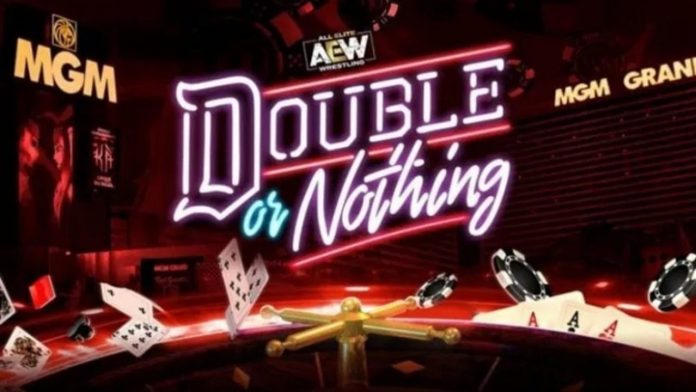 Professional wrestling, similar to so many other things, is often a matter or perspective.

I don’t know anything about NASCAR other than it looks like cars turning left for hundreds of miles at a time, but there’s a fan base that can appreciate the razor-thin maneuvers that the best drivers in the world use to win championships. Often, you can say what you want about a performance, but the question is, did it serve its audience, and most importantly, did it make a profit?

The true barometer of success, especially in business, is profitability.

All Elite Wrestling’s Memorial Day tradition of its Double or Nothing pay-per-view, which will be held again in Las Vegas, but this time at the T-Mobile Arena, made news when tickets went on sale for the show earlier this month. The Wrestling Observer’s Dave Meltzer reported that the event set a gate record for professional wrestling in the United States when it generated over $1 million in ticket sales.

AEW just hit the $1 million mark in ticket sales for Double or Nothing on day one. WWE has done this before many times. Aside from WWE, no wrestling company did this as quickly and only NJPW/ROH ever hit the number in the U.S. aside from WWE.


No matter how you look at it, that’s very impressive, but the details tell a somewhat different story.

First, it should be noted that while Meltzer is one of the best historians of the industry, and his work, criticized or not, chronicled many of the narratives that unfolded in the sport, not just in America, but around the globe. Quite simply, there wouldn’t be a niche business of “pro wrestling journalists” today without the contributions of Dave Meltzer, who worked tirelessly at a time when sending printed pages to a limited demographic was standard for sports entertainment insiders. Meltzer didn’t depend on social media to make a name for himself, but rather years worth of work to establish his name as someone with an informed take on the sport.

That being said, The Wrestling Observer is how he makes a living and in the modern age when the nature of technology doesn’t allow for one dirt sheet to have the market cornered on a niche audience, it makes sense for him to serve his base, the same way that anything that makes a profit serves its audience. Don’t get me wrong, that’s not a knock on The Observer either, that’s capitalism and if Dave can maintain subscriptions then he earned the cash.

It’s rather easy for critics of The Observer, mostly those he reported on in his pages years ago, to claim that he’s bias with his coverage of All Elite compared to WWE. Of course he is, but that’s more human nature than anything else, and it’s easy to see the reasons for it. Since Meltzer made a living reporting the tricks of the trade of Vince McMahon’s empire, he’s often considered persona non grata there. On the flip side, he has a friendship with some of the AEW roster, The Young Bucks named a move after him, and Tony Khan was interviewed on Wrestling Observer Radio a few times. Is Vince McMahon going to accept a call from Dave to be on a podcast?

All Elite, the second-biggest pro wrestling company in America gives The Wrestling Observer, the industry’s leading insider newsletter more access to talent. You can see why the group would get favorable coverage, and stuff like that happens in other forms of media all the time. Does this mean that Dave Meltzer is a paid shill for Tony Khan? Absolutely not, and after making a career of reporting inside information, he knows that The Observer on Khan’s payroll wouldn’t stay a secret. Does that mean that Meltzer won’t report accurately on AEW? No, it doesn’t mean that either.

The bottom line is, The Wrestling Observer quite literally has a vested interest in the success of All Elite because it provides content for the newsletter, and much of that audience leans toward the contrarian opinion because often discontent with main stream wrestling is what leads fans to seek out the alternatives that are covered in the dirt sheets. I’d say that Meltzer is less anti-WWE and more of a contrarian of the causal sports entertainment product because that’s what his readers look for, something beyond the paint-by-numbers approach of a corporation with record-setting guaranteed money.

Pointing out the strengths of the alternatives isn’t necessarily skewing the truth, but rather serving an audience.

Sam Panico, a 26-year wrestling veteran, is one of the smartest people I know from the wrestling industry. He learned under Dory Funk Jr. at the Funkin’ Dojo and went onto to become a notable trainer himself with several successful students, including Joaquin Wilde. He’s also one of my favorite people in wrestling so I value his opinion. Sam pointed out that while the Double or Nothing gate is an accomplishment, if adjusted for inflation, the famous Goldberg/Hogan title match on Nitro at the Georgia Dome in 1998 still generated $400,000 more than the AEW pay-per-view gate.


That’s not to diminish the fact that a $1 million gate is proof that the company is doing something right, but rather to point out that Meltzer, too often, in my opinion, wants to spin to narrative that All Elite Wrestling is somehow a bigger product than Vince McMahon’s global corporation. It’s almost unfair to AEW to try to push that story because the company has only been around a few years and it takes a steady building process to expose the company to a wider audience. The bottom line is, Vince McMahon will make a few billion dollars over the next few years because of the massive TV contracts and the Peacock deal. Furthermore, despite the talk of demos or DVR numbers, Dynamite hovers around about a million viewers a week, and there’s nothing wrong with that. Raw, depending on the competition from other channels, is somewhere near 2 million viewers a each week, which is considered a sluggish rating. No matter how you want to spin it, more people are still aware and still watch WWE than All Elite Wrestling.

Again, that’s not a knock on AEW, but the narrative of an all-time gate record suggests that the company is on the brink of taking over WWE’s spot, which simply isn’t the case. More than a million people have to watch Dynamite for that to be possible. At this point, I think I have to include the standard disclaimer that while All Elite isn’t perfect, it doesn’t have to be either. It’s existence has done more for the sports entertainment industry than anything else in the past two decades. Personally, I often find the WWE product bland because it’s more or less on auto-pilot based on the previously mentioned TV deals, but that doesn’t diminish its standing as the representation of professional wrestling in the United States.

Keep in mind, many of those that spent money on that $1 million gate for Double or Nothing are the diehard fans that are willing to travel to the show so those fans watch Dynamite every week. For AEW to reach the level that Meltzer touts, more causal fans will have to consistently follow the product, and the company has the talent to build the audience. So, the Double or Nothing numbers are an accomplishment and impressive, but it’s not an indication of another boom for the industry. The much more important factor in all of this is that success for AEW isn’t to beat the WWE, but to have a profitable product, and based on their TV deal, All Elite is a profitable venture so the company is already successful.