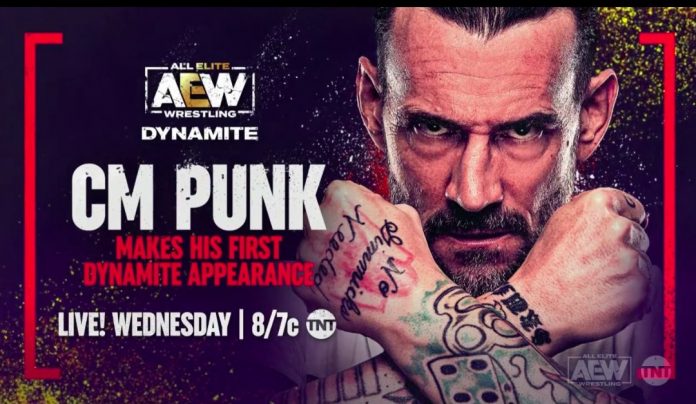 Professional wrestling is about the moments.

It’s something that I’ve written about a lot in recent months when I discussed All Elite Wrestling, the ability to create the moments that will be look at in hindsight as notable or historic. The ability to create those moments and the emotion that goes along with them are ultimately what draws money in professional wrestling. Furthermore, those moments put a foot print in the history books of the industry and cement an organization are a true player in the sports entertainment business. When Scott Hall jumped the rail on Nitro, it was a moment that became woven into the fabric of the history of sports entertainment. When Steve Austin landed the stunner and claimed the championship in 1998, as Jim Ross yelled, “Stone Cold! Stone Cold! Stone Cold!” it was a book mark in the pages of history. You can cite many examples, but the common theme is those moments had an impact that shifted the direction of the industry.

Last night on Rampage, AEW solidified one of those moments in the industry.

Critics of CM Punk can say a lot, and depending on your perspective, maybe those critics have a point. Maybe CM Punk was too difficult to work with, maybe CM Punk should’ve paid Colt Cabana’s legal bills without a lawsuit to settle it, and maybe CM Punk was delusional to even attempt to fight in the UFC.

But, on TNT last night, CM Punk proved exactly why he’s a generational talent, and more specifically that WWE truly missed the boat to make him a main stream star a decade ago.

Ahead of CM Punk’s debut, I didn’t really know what to expect, particularly because while he would walk on water in Chicago, he seemed so distance and cold to the idea of professional wrestling in interviews the past several years that I wasn’t sure if this signing would boil down to a quick money grab while he’s still young enough to collect it. Plus, we know from interviews in the past that there seemed to be some real-life tension between Punk and AEW management because they initially approached him via text message instead of a formal discussion. Furthermore, I have to be honest, I never though we would see CM Punk in AEW or even in professional wrestling again based on the fact that he appeared at a convention in Chicago the same weekend that the company had a pay-per-view in his hometown, but he didn’t sign for it.

That being said, the promo that CM Punk cut in the ring was perfect and the sincerity in his eyes gave the impression that he didn’t sign with All Elite Wrestling just to pad his bank account. Granted, Punk isn’t lacing the boots for free, and nobody should expect him to, but he earned $1 million total for two subpar fights in the UFC and he stayed busy since he left WWE so he’s obviously financially stable. Plus, if Punk, a former Ring Of Honor and WWE champion, wanted to make the easiest cash possible, he could tour the convention circuit to make great money to sign autographs and pose for photo-ops. Speaking of Ring Of Honor, while the company definitely lost steam since the Elite faction left to form AEW, the mention of the promotion gave depth to the promo and almost gave a peek into his mindset for what he wants to accomplish in All Elite.

This goes without saying, but the crowd reaction was insane, and depending on how this whole scenario plays out, hindsight might see it as a pivotal moment in the history of the industry.

Basically, CM Punk’s promo was “for the love of the game,” and again, nobody in the major leagues works for free, but the fans can appreciate that the performers they support have as much passion for the sport as the audience. In many ways, that same “for the love of the game” philosophy goes along with why Tony Khan originally funded the launch of AEW. Let’s be honest here, Tony Khan is from a billionaire family so he could’ve just left a few hundred million in the bank and collected the interest to live a lavish lifestyle. Tony Khan doesn’t have to work a day in his life if he doesn’t want to. That’s not a jab against the Khan family either, with the conflict, war, and political unrest in the world, if someone has the good fortune to be that financially secure then good for them. The point being, Tony Khan put the money up to fund AEW because he has a dedication to the industry, and that philosophy makes it very easy for the fans to want to see the company be successful.

That’s why All Elite Wrestling has a level of good will with the fans, and Punk’s promo, at least to some extent reinforced that theory.

As I said, if this was just about the money, Punk could sign his name at conventions for easier cash, but at the same time, you know that he got a hefty contract from Khan, and the merchandise alone will translate to major cash, another indication of just how much more the WWE could’ve done with Punk when he was under contract. That brings up another point, CM Punk said for years, specifically on the Colt Cabana podcast that resulted in a few lawsuits, that he could be the top guy if he was given the chance, and now he has the chance to prove it. It’s ironic that main stream media outlets picked up his AEW debut, very similar to the coverage that the pipe bomb promo received a decade ago, but you can bet Punk’s star power won’t be minimized in AEW.

Unfortunately, I had to write about it a lot in recent years, but the WWE has developed a level of complacency and even an unintended mediocrity since it secured its massive TV contracts. Without any tickets and live event merchandise sales, the company touted record-setting profits on conference calls, and is projected to do so for the next few years. With the Peacock deal, the writing team doesn’t necessarily have to “sell” pay-per-views to the audience because the money is in the bank, the company makes the same amount of money for the contract regardless of the amount of viewers for pay-per-view. Essentially, the WWE was too comfortable for too long, and the talent as well as the fans were short-changed in the process while the shareholders made money on the stock price.

Do not miss @CMPunk’s return to the ring and #AEW debut against @DarbyAllin (w/ @Sting) when #AEW is LIVE on Pay Per View for #AEWAllOut – Sunday, September 5, 2021 from the @NOW_Arena in Chicago.
Available on all major providers, @BleacherReport, and @FiteTV (Internationally) pic.twitter.com/PaieFgOkix


From a fan perspective, it’s a much easier sell for fans to put down their money for tickets or pay-per-view orders when it seems like the company and the performers genuinely want to try to give them their money’s worth. Yes, everyone wants to make money on the AEW roster, which is the whole point of the wrestling business, but the narrative of a movement for All Elite Wrestling to spark the business for the improvement of everyone involved is easy for fans to rally behind. The WWE is a corporation that released dozens of performers during a global pandemic while they made the previously mentioned record-setting profits so is that something that lends itself to fan support? Who better to lead an alternative to corporate sports entertainment then CM Punk?

Pro wrestling is about the moments, and the moment that CM Punk debuted on Rampage might be a segment that shifts the direction of the industry.