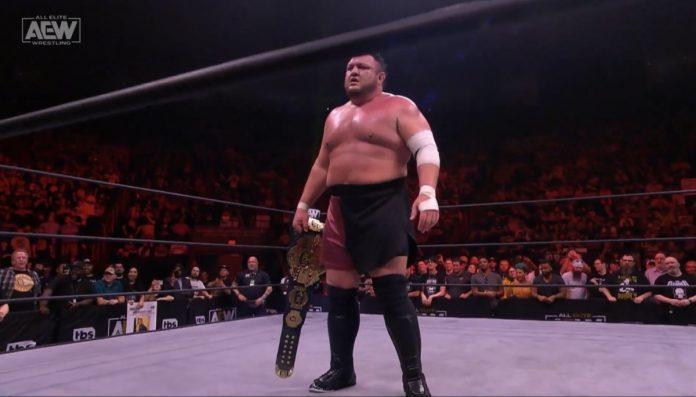 All Elite Wrestling has reignited what was a very static industry, and still rightfully has its critics.

I’ve written many times before that AEW isn’t perfect and it doesn’t have to be. There are some natural comparisons to WCW in its heyday because of the lucha influence, as well as the fact that the shows are hosted on the Turner networks, the same channels that featured Nitro in the late-90s. So, when you remember that Nitro wasn’t perfect, (Jerry Flynn vs. Disco Inferno didn’t exactly set ratings records) you can’t expect Dynamite to be flawless either.

That being said, one of the consistent criticisms of the All Elite product is that the programming varies wildly with segments that work very well to those that can be almost bizarre for its lack of logic in the grand scheme of things. On a general scale, you have feuds like the masterfully done MJF vs. CM Punk storyline that culminated in a memorable dog collar match. The promo on television the week of the pay-per-view was a very strong selling point, which is exactly what you need to sell traditional PPV in the modern era and then the bout itself delivered a classic for the viewing audience. It proved that major business can be done with CM Punk, even after seven years away from the sport, and MJF became a bigger star in the process so it was a win-win for everyone involved. On the other end of the spectrum, Adam Cole barely winning a match, including a defeat to Orange Cassidy in a lights out match, a few weeks before he challenged for the AEW world championship on that same pay-per-view didn’t exactly make Cole shine before he was in a main event spot. In fact, the argument could be made that AEW had one of the WWE’s best young stars walk onto their television show without the delay of a 90-day no compete clause and somehow his star power has been minimized under the Tony Khan banner. Unfortunately, Adam Page defending the title on very few occasions after he unseated Kenny Omega hasn’t exactly showcased him as a dominate champion either. Granted, Tony Khan wanted to wait for the specific major shows for the American Dragon matches, but when there’s a promo where Page himself mentioned lack of title defenses prior to the Texas death match against Lance Archer, it’s obvious that he should’ve been featured more often after he won the championship.

This week’s edition of Dynamite was a microcosm of this problem in AEW, particularly when some segments toward the conclusion of the show were such a contrast to what was booked earlier that you almost had to wonder if you were watching the same broadcast.

The show kicked off with CM Punk vs. Pentagon, and while I’m not sure what the abrupt gimmick change for Pentagon really brings to the table, other than something for him to do while Fenix is still on the sidelines, this bout proved what I’ve been saying for the past few years, Pentagon has the potential to be a main event talent if given the opportunity. Granted, an opponent having a good match against CM Punk isn’t shocking, but I really think that Pentagon, specifically because of his look, in-ring work, and unique charisma has the talent to be a much bigger star than to get typecast as just a high spot wrestler in the tag team division. That’s not to say there aren’t entertaining aerial bouts, but they are rather common in All Elite so it’s much easier to get lost in the shuffle of the bloated roster. I’m not sure why, but prior to Fenix’s injury, there were times that the Lucha Brothers were regulated to the Youtube shows. Furthermore, I think Fenix also has the potential to be a main event talent. The point being, there was a successful segment all around because event with a defeat, it spotlighted Pentagon as a star on television.


Along with the advertisement of Adam Page vs. Adam Cole in a Texas death match this week on Rampage, it was announced that Darby Allin will compete against Andrade in a coffin match next week on Dynamite, which highlights one of the other major problems with the promotion.

Listen, I have tickets to AEW in Pittsburgh next week so as a stand alone show, I think it’s great that there’s something unique on this specific event, but the amount of gimmick matches Tony Khan books is almost comical and already started to yield diminishing returns. There was the rather random Hardys vs. The Butcher and The Blade tables match last week. There’s the Texas death match this week, not too long after the Page/Archer Texas death match, and there will be the coffin match next week on Dynamite. Was there anything to really justify a tables match? Has the Page/Cole feud truly escalated to the point that it justifies a Texas death match? Was the Darby/Andrade angle really on anyone’s radar? By comparison, look at the CM Punk vs. MJF dog collar match and the build to it, are any of these other gimmick matches on that level? More than anything, the rush to book stipulations seems like a way to attempt to boost ratings for a week, which is something from the Vince Russo playbook and definitely not something that can yield success for more than a few weeks.


Finally, the main event of Minoru Suzuki vs. Samoa Joe for the ROH TV title was a great match and it’s amazing that Suzuki can still go at that level at his age. That being said, Suzuki is one of my favorite wrestlers of all time and a legitimate legend in Japan, but the placement of this bout on the show might’ve been a miscalculation. I could be wrong and actually hope I’m wrong, but it’s doubtful that the ratings will maintain or improve for the main event. Don’t get me wrong, Suzuki is incredible, but the harsh reality is, the vast majority of the TBS audience probably has no idea who he is or understands why Suzuki vs. Joe is a dream match. It probably would’ve been better to open the show with this and then promote CM Punk in the main event segment. Again, it’s a harsh reality, but on a national level more fans will tune into the show to watch Punk than Suzuki. As far as the booking all over the place, the stellar Suzuki vs. Joe match was a highlight of the broadcast, but that wasn’t the case for the post-match angle.


More importantly and as I’ve said before, the most valuable acquisition with the ROH purchase was the video library because of the amount of streaming platforms that are willing to pay major money for content. The value of the current Ring Of Honor “brand” is minimal and if it wasn’t then Sinclair wouldn’t have sold it. The bottom line is, ROH wasn’t generating enough revenue to sustain itself and that speaks volumes to its lack of marketability among the wrestling landscape. It’s not meant as a knock on any of the athletes that worked hard during its existence, but the AEW audience doesn’t have interest in the Ring Of Honor product. Again, if fans were invested into ROH then it wouldn’t have been sold. If the post-match attack on Joe is supposed to generate interest in ROH, what exactly is the point? In my opinion, the resources, including valuable national TV time, of All Elite should be focused on establishing AEW. This attempted ROH crossover is rather pointless and dilutes the program Satnam Singh, whoever he is, attacked Samoa Joe, and not only does the audience have no idea who he is, considering that All Elite usually sells work rate, what exactly is the payoff with Singh?

On a show that had CM Punk highlight another potential big star, Pentagon, and the very entertaining Samoa Joe/Minoru Suzuki bout, there were announcements for more random gimmick matches and the debut of Satnam Singh. It’s known that Tony Khan is a fan of Paul Heyman, but his attempts to book like the leader of extreme sometimes look like Vince Russo scripts. The show doesn’t have to be perfect, but as some point, these booking fumbles will hinder the progress of the company.