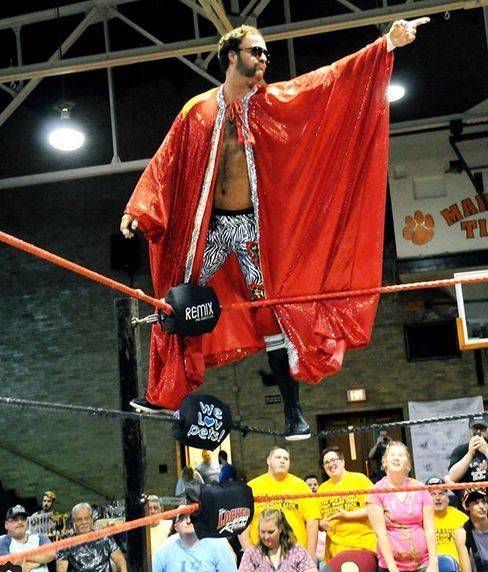 “Life is a journey, not a destination” -Ralph Waldo Emerson

Three years ago when Chris Parsons reemerged onto the professional wrestling scene in the mid-west, he had grown as a person on a variety of levels before he decided to lace up a pair of boots again. Prior to that decision in 2015, the grappler that proclaimed himself Magnum CK upon his return to the squared circle, had pursued sports entertainment previously in 2004 until 2009, but didn’t assemble the pieces of the puzzle that seemed right. Ironically, night shifts at a warehouse and night classes led him to follow a path to the theater, which saw him spend a few years living in Chicago to study the art at the iconic Second City stage company, where names like Farley, Belushi, Murray, Colbert, and others honed their craft before they made their names in show business.

Parsons found himself through the stage. After a successful tenure in the music halls of Chicago, he moved back to the mid-west and was ready to introduce sports entertainment to the persona that exemplified who he was. With a combination of the devious side of Andy Kaufman, an influence of Arn Anderson, and a flamboyant spin of Gorgeous George, Magnum CK spent the past few years bringing his unique brand to the ring to entertain the audience.

A mainstay in Ohio’s Absolute Intense Wrestling, Magnum zigzagged across that state to perform, and branched out to several promotions in the tri-state area, as well as working matches as far away as Canada for Toronto’s Greek Town Wrestling. Despite his villainous persona, his performances inside the ring ropes garnered rave reviews for the ability to always entertain the paying customers. Perhaps, the highlight of Magnum’s return to the sport was this past July when he and his stablemates, The Production, a theater-inspired group that suited him perfectly, won the AIW tag team titles.

I bleed AIW. There has never been a place that felt more like home in my life. Holding this championship was undoubtedly the greatest honor of my career. I am so thankful, so grateful, and so proud. Follow @aiwrestling and support them– I will for the rest of my life. pic.twitter.com/lEyn3PLQcK

However, the success and more specifically, the grind of wrestling every weekend took its toll on his body.

“For me, my lower back started hurting after a match in New Jersey in March 2018 and that same pain got significantly worse over time as I continued wrestling. By June, I was a mess. Bending forward would cause such a sharp pain that it would immediately zap my breath away. I had to cut down my weight training load by half at least and there were many movements that I dropped altogether because I simply could not do them. Nonetheless, I kept wrestling at least 6-10 times a month and did not miss a beat on the road, despite the fact that everything was clearly getting much worse,” Magnum explained.

A few doctors appointments and therapy sessions later, Chris Parsons was confronted with a harsh reality about the status of his injury, and an even more difficult decision to make for his wrestling career.

“Over six months after all of this pain started, I got a call from my doctor’s office with my scan results. The doctor told me that I did have fractures in my spine, stress fractures. She said that I had probably had them since the pain started back in March. The reason why they weren’t healing could have been because I was wrestling every week, but the doctor added that the most likely reason they were not healing, and why i had the fractures in the first place, was because I have spina bifida. In addition to the spina bifida, I found out that I had likely broken my tailbone in a match from June on an atomic drop that went a little sideways. Apparently my tailbone is now curved the wrong way. and that was contributing to the extreme pain when sitting down. Truly, there is currently no comfortable position to be in whether standing, sitting, or laying down. Essentially, I was at a point where I was facing further, permanent damage,” Parsons said.

After the time he spent living on a friend’s couch in his younger days to starring roles on the stages of Chicago, Chris Parsons finally found the performer he wanted to be in the squared circle so he was torn as to what to do about his sports entertainment passion. But, when he suffered serious pain after a relatively light match in the spring, he knew it was time to hang up his boots.

“I had a follow up and the words “spinal fusion” were mentioned again as a real possibility and I knew I had a decision to make after waking up in this state after a fun little match that had such little physicality. I talked to my wife for dozens of hours. Eventually, I just had to make a choice. I am still a young man and I have a theater life that involves not only directing shows and managing theaters, but performing in musical theater with my wife and kids as well. It had finally occurred to me that these injuries were so serious that if I made a wrong move I could see my entire performing future goodbye,” he commented.

Last month, it was only fitting that the conclusion of Magum CK’s in-ring career took place where it truly took off, inside of an AIW ring, an event that saw fans in a line that stretched the length of the venue for those that wanted to express gratitude for his contributions to the events. After the finally belled sounded on a tag team contest, Magnum performed a musical tribute to his hero, Andy Kaufman, as the fans and his peers in attendance gave him a standing ovation when he exited the ring.

What you've all given me is so amazing. You've all given me is closure. All I ever wanted was to be good at wrestling. You let me feel great at it. I will love you forever and I finally feel like I accomplished what I've wanted since I was 3. Thank you from the bottom of my heart pic.twitter.com/JVzIlNFokT

“In every way, it was the most magical night of my performing career. I’ve been performing for 16 years and had some amazing roles and nights, but the day of my last match was the ultimate for me as a performer. I’ve never felt so loved and respected,” he explained.

Post-wrestling, Chris Parsons is already very busy when he’s not spending as much time as he can with his family, including his duties as a manager of two theater productions, and a job to become an English teach next year. He and filmmaker, Mike Rhodes also began work on “Markin’ Out 2,” a sequel to their documentary about independent wrestling. After he heard the final three count of his wrestling career, Parsons had a chance to reflect on his accomplishments.

Merry Whatever from your favorite lovebirds! pic.twitter.com/AO04EAO4OJ

“A kid who grew up to be a wrestler that he would’ve loved to watch. That’s it. I had a dream and I did it. All I ever wanted was to feel like I was good at wrestling. I feel that I was great at wrestling and a lot of people know it too. What else could I ask for? At the end of the road, I look back and smile with pride because I became the performer that I always dreamed that I could be,” he said.

So, the destination for Magnum CK’s wrestling career was abruptly cut short when he began to reach the peak of his career, but the journey he took to obtain his goal in professional wrestling saw him earn the respect of his peers and entertain the audience.