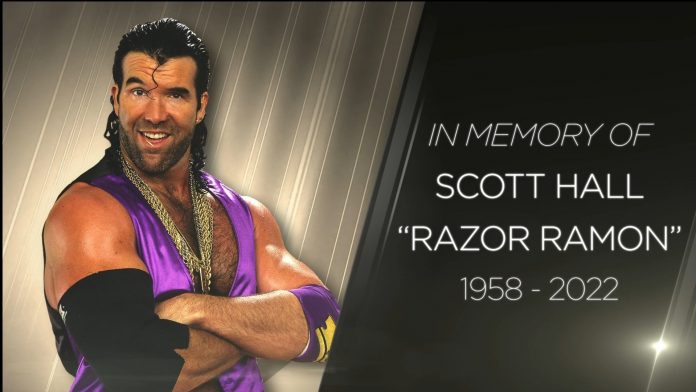 It was terrible news that made headlines on social media that Scott Hall, one of the biggest stars of the 90s, passed away earlier today at the age of 63 after he suffered three heart attacks from compilations following hip surgery last week. Hall’s longtime tag team partner and best friend, Kevin Nash shared the news on social media that the former IC champion was going to be taken off of life support, prompting tributes from wrestlers and fans on social media.

The career, very similar to the life, of Scott Hall is very complex.

In the mid-80s, Hall broke into the business under the guidance of Dusty Rhodes in Florida, but made a splash on the national scene a few years later during the waning years of Verne Gagne’s AWA, where he formed a memorable team with the future “Mr. Perfect” Curt Hennig. “Big” Scott Hall sported a very-80s mustache and hadn’t found much of a wrestling character yet, but he was an athlete that had the look of a potential star. As we know, Verne’s group was fledgling during the latter part of the decade, as it couldn’t keep pace with Vince McMahon’s national expansion or even the Jim Crockett Promotions attempt to grown beyond its regional boundaries.

By the start of 1990, the AWA was nearly non-existent, but Hall found himself working in different places for what was left of the territory system. A somewhat comical story being that when he worked in CWA in Europe, he was known as “Texas Scott” because at the time, most European fans assumed that the majority of Americans were cowboys. Back in America, he inked a deal with Ted Turner, who purchased Jim Crockett Promotions a few years earlier after the NWA also folded under the pressure of McMahon’s national push. Dubbed, “The Diamond Stud” in 1991, you can see glimpses of what became Razor Ramon and later “The Outsider” character in the look of the early WCW persona. It’s ironic that the year that Hall originally spent under contract to WCW was very undistinguished. Granted, WCW was a mess at the time with the turmoil behind-the-scenes, particularly with the exit of Ric Flair while still heavyweight champion, but it’s such a contrast to the priority he was when he returned to the organization a few years later.

Despite some national TV exposure previously, Hall hit it big with the Tony Montana-inspired Razor Ramon gimmick when he signed a WWF deal in 1992. Hulk Hogan was on his way out of the company for a flopped stint as an actor, and after the steroid scandal at the time, a true workhorse like Scott Hall was an extremely valuable asset for the organization. It can’t be understated how important it was during that initial four-year stint that Razor was to bolstering the company through some rather lean years as the organization went in a more cartoonish direction to try to soften its image after the negative press of the previously mentioned steroid scandal. Obviously, the ladder match is rightfully iconic, but you can browse through the vast majority of the Razor catalog at the time and you won’t find a subpar match from this time frame. Furthermore, Razor personified cool and everything “The Bad Guy” did made him look like a star, which is sometimes a lost art in modern wrestling. Quite simply, Razor could talk and he could go bell-to-bell so the argument could be made that he was one of the most well-rounded workers in the business during this era.

As we know, the sports entertainment business is based on drawing money, and the ability to make the most cash possible while you can is the entire point of the industry.

In one of the most important ripple effects in pro wrestling history, Scott Hall was offered huge money from Eric Bischoff to ink a deal with Ted Turner in mid-1996. For several years, the WWE narrative was that Hall and Nash jumped to WCW to make a money grab, but the reality of the situation was that Vince McMahon was still hesitant to spend big money in the midst of the wrestling recession of the early-90s so Hall did what anyone else would do in the same position, he took the major money to return to WCW. Keep in mind, when Razor was negotiating with McMahon prior to his exit, the industry was still in a slump, and the fact that Bischoff was willing to invest to secure star power was still somewhat of a toss up since the industry was in such flux at the time. Diesel, a former WWF champion, found himself in the same position as his best friend, he was in a good spot under the McMahon umbrella, but hadn’t made the top money of the previous generation yet.

Hall went from Madison Square Garden with the infamous “curtain call” to walking onto a live broadcast of Nitro in the span of just a few days. Hall presented as an invader in an attempt for a hostile takeover of WCW almost immediately beamed a spotlight on a mostly mediocre Nitro program since its launch in 1995. Just a few weeks later, Diesel’s WWF contract expired and Kevin Nash was able to show up on WCW television to join his tag partner. The presentation, the promos, the music, and the logo went main stream. WCW was propelled into the forefront of the pro wrestling industry, but even more important than that, the competition sparked the biggest boom period in the history of the sport.

Monday nights became appointment viewing as a part of pop culture, and “The Outsiders” being the cool bad guys were a major reason for that. Sadly, about a year into his WCW stint, Hall had to take time away from the spotlight to go to rehab and those problems would plague him for several years. The stories and the incidents were numerous. Sadly, it got to the point that the controversy of Scott Hall somewhat overshadowed his stellar in-ring work. Those problems led to his abrupt exit from World Championship Wrestling in early-2000, and he made a brief, but extremely memorable appearance in ECW. After his Turner contract expired, which was paid out after McMahon bought the company, he re-signed with the WWE for an NWO reunion in 2002. His WWE comeback lasted just three months before he was fired when he was intoxicated backstage.

#ScottHall walking out to The #Fugees at a #ECW show is the most underrated entrance of All Time!! #RIPScottHall. pic.twitter.com/vTspNzk8Tg


He resurfaced for some of the very early NWA-TNA pay-per-views and there were flashes of brilliance in his performances, as he still looked like the biggest star on the show. The rest of the decade was a mixture of a few tours of Japan and an occasional return to TNA, but it was clear that Hall’s prime was behind him. The failed TNA Monday night experiment put Hall back on television, but it was obvious that his days in the ring were numbered. After that TMZ headlines over the next few years had made many concerned for Hall’s well-being.

Finally, in 2013, Scott Hall’s longtime friend, “Diamond” Dallas Page assisted him in cleaning up his life and he was seen as much healthier since that time, despite a myriad of health problems from the years of drug use previously. The following year, Razor Ramon was inducted into the WWE Hall of Fame and concluded his speech with the memorable line, “bad times don’t last, but bad guys do.” Hall made occasional appearances for the WWE since that time and seemed to have reach a place of peace with his legendary status.

The way he stares into the hard cam when he delivers that last line is proof of how this dude was a master. #RIPScottHall pic.twitter.com/niZQ3cWJSV


Several years ago, ESPN did a story about Scott Hall and it revealed that some of the real-life trauma might’ve contributed to his problems later in life. Regardless of his personal struggles, Scott Hall is very much a success story. If the news of his passing made headlines a decade ago, it wouldn’t have been surprising, but he put in the effort to make his career a true redemption story. As much as his personal problems overshadowed his in-ring work by 2012, his comeback to a healthier life over the past ten years put his career in a much more accurate context. The bottom line is, without Scott Hall’s jump to WCW, the Monday night wars and thus the biggest boom period in history might not have happened. The look, the in-ring work, the charisma, and the mic skills were all a part of the Hall skill set. Quite simply, when Scott Hall was on, he was as good as anyone in the industry.

My sincere condolences to Scott Hall’s friends and family at this difficult time.