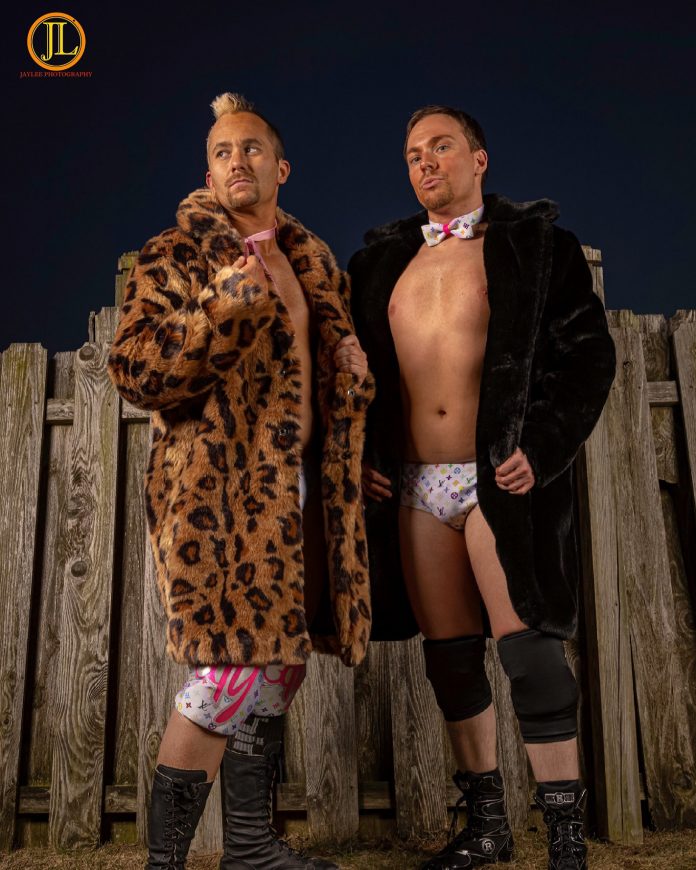 When it comes to tag team wrestling, it’s an aspect of the industry that over the past two decades, and even at other times at various points in the history of the sport, somehow became overlooked. Ironically, historians of the grappling arts can tell you about a golden era of the territory days, a time when the country was divided into regions of different organizations, when tag matches were the main event draw for fans that flocked to the box office. In fact, the argument could be made that an action-packed tag bout might be the most thrilling narrative in the genre. One of the more endearing qualities of the duos division is the chemistry between the pairs of athletes, when two competitors fit so well together that the whole is greater than the sum of the parts.

Let’s be honest here, as cool as Road Warrior Hawk’s double mohawk was, the presentation just isn’t the same without Animal in another pair of spiked shoulder pads by his side. Micheal Hayes moon walking around the ring isn’t quite as flashy unless he has Terry “Bam Bam” Gordy and Buddy Roberts to share the ring with him. More recently, Bully Ray had a stellar run and even picked up a world championship on his own about a decade ago, but nothing seems quite as right as when he’s reunited with D-Von in the tye-dye.

But, how does a team truly form, and more importantly, where does that chemistry for a great tag team develop?

Their Minnesota background might’ve brought the Road Warriors together, while a love of Jack Daniels and country music united the Freebirds. The Dudleys found themselves in a dingy bingo hall in South Philadelphia before they created a legacy that measures up to the other teams mentioned. In each case, the pairings just fit together and it worked.

As far as fitting together in the over-the-top spectacle that is the larger-than-life business of sports entertainment, a fashion model with a fashion designer certainly is a tailored-fit.

Based in the Pittsburgh area, a region with a noted history of the squared circle, “The Runway,” the tandem of Calvin Couture and Tyler Klein, have quickly made strides in just a few years to become one of the top teams in the tri-state area. In an example of the impact of modern technology, a social media exchange eventually led to the pair of fashion-based grapplers to consider a new stage of their careers as a team.

“We had followed each other’s social media pages for a little while and then became good friends shortly after. We both quickly realized we were drawn to similar things within wrestling and had the same outlook on where we wanted to head in our careers so it was kind of a natural next step, Calvin explained.

“Really, my first impression of Calvin was how fabulous his look was. But, honestly, first I thought was man here is someone who gets it. Wrestling, character, and the look all of it, this guy has it all. He was the personification of what wrestling is to me, honestly. He’s not about the flippy high flying stuff, he’s about being remembered by his entrance. Calvin can get over on his entrance and that’s what stood out the most to me,” Tyler added.

A four-year pro, Calvin Couture quickly became one of the “must-see” athletes within the tri-state area, with an undeniable star quality and in-ring pose well beyond his experience level. Clad in a red velvet suit and blue velvet shoes to match, “The Fashionista of Professional Wrestling” expanded his profile considerably among the independent circuit. Naturally, the fashion model, known for his trademark bow tie that matches his boots for in-ring competition, has a designer to keep his style current with all the latest trends. Klein made his reputation with an offense of innovative maneuvers, and occasionally uses a tape measure to wrap up opponents when the referee is distracted, a tactic that he claims is accidental. Although, for Klein, who has a few less years under his belt as a wrestler than his tag partner, the chance to work as a unit helped him grow exponentially as a performer.

“Personally, I love tag team wrestling. I feel like it’s too often forgotten, everyone wants that stand-alone spotlight With so many people wanting that, I’d prefer to share it with someone who has my back. With tag wrestling you feed off each other’s energy and you know you have someone there who challenges you to aspire to their level. With Calvin, that’s how I feel. Quite honestly, the indy wrestling scene could use more coherent tag teams, those that dress in similar looks and can play off each other. That’s why we have been so successful as a tag team. Too many tag places just have random tag teams, We bring that missing element,” Klein remarked.

Essentially, The Runway “get it” when it comes to professional wrestling, the goal is to entertain the audience, and they have certainly accomplished that as they are more in-demand now than every before with a championship match for Prospect Pro Wrestling this weekend before they challenge The Mane Event of Ganon Jones and Duke Davis for the International Wrestling Cartel in a bout that many expect to have a major impact on the tag division in that promotion. Along with all that, the fashionable duo are scheduled for other matches in states outside of their home turf as well, which adds another dynamic to their careers.

“Oh, a typical ride is always fun. When we aren’t trying to make sure we look our absolute best, we are for sure critiquing the overall looks on the card and who could be second to us. Also, usually coming up with new and creative ways of standing out or our next look we plan on coming up with. I think because of how well we work as a team and our presence. We bring something different to the table when it comes to wrestling,” Tyler explained.

The extra hours put in on the road trips to zigzag their way through different states can be exhausting and more demanding than the events close to home, but each athlete has expressed the importance to always take advantage of the opportunity to expand their brand. Preparation is a key moniker for both grapplers as they became more well known each time they would through the curtain.

“Outside the ring, Calvin is just as fashionable as he is inside the ring. He’s shopping for the latest look, doing tape study, and just living his best life. He doesn’t take a break on anything,” Klein said of his tag team partner.

“Tyler has a good work ethic and is always thinking of new and creative ways to stand out in a crowd,” Calvin said of Tyler.

The duo saw their biggest exposure more recently when they competed for The Collective, a group of independent organizations that came together for nearly a dozen events over the course a weekend, as well as the chance to perform in Tampa during the independent events that took place during this year’s Wrestlemania weekend. While those matches were their most high-profile bouts so far, you can bet that you will continue to see Calvin Couture and Tyler Klein in the spotlight, as its second nature to them. Perhaps the biggest takeaway from how The Runway was formed is, in an industry often built on selfishness and individuals effort to make themselves look good, Calvin and Tyler put their own stock aside to fully contribute to the concept of their team, which is one of the many reasons they have been successful.