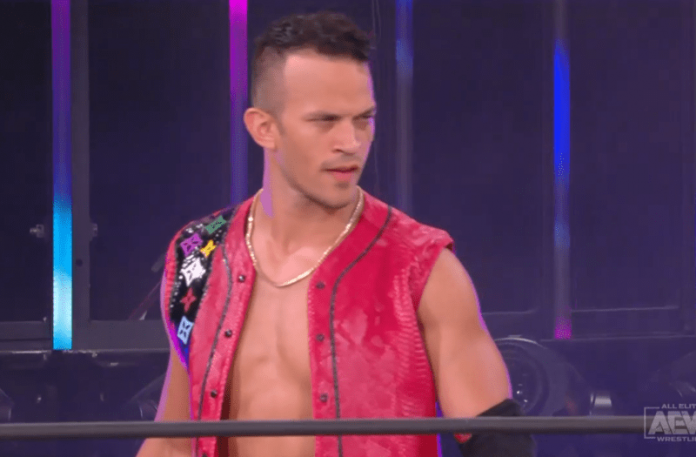 With so many of the AEW stars still on the sidelines or some simply dealing with injuries so they are working lighter schedules at the moment, it’s imperative that All Elite Wrestling look to add depth with the elevation of some of its other young stars. Don’t get me wrong, I hope Bryan Danielson wrestles until he’s 75, but in case that doesn’t happen, there must be the next crop of talent that will move into those money-drawing spots. Keep in mind, this isn’t simply wrestlers that are good to have on the card, which is also very important since some mid-card guys have good careers in that role, but rather the talent that will be the reason that fans discuss to invest their money into the product through tickets and pay-per-view orders.

There are some great in-ring talents throughout the history of the business that had great runs in the mid-card, such as someone like D-Lo Brown, but All Elite Wrestling might’ve found its next generation of money-drawing stars during a segment on this week’s episode of Dynamite.

By nature, All Elite has to build for the future because the company only has three years behind it. Chris Jericho will go down with a legacy uniquely his own, and while anything is possible, even Y2J might eventually hang up the boots so it’s doubtful that he will be an in-ring wrestler ten years from now. The same can be said for Danielson and CM Punk, the two biggest stars on the roster right now. That’s completely fine because the opportunity is there for both of those guys to add this chapter in their career and the company benefits from it so it’s a win-win situation.

That being said, we’re talking about the future and the prospects that might have the potential to be in those same spots a few years down the road.

As much as the All Elite product rightfully gets criticized for some of its scattered booking and mistimed segments, the FTW title match and the Ricky Starks promo that followed were a home run, giving a peak at the potential depth of the roster. Granted, as we’ve discussed several times, there are definitely too many wrestlers on the roster and a lot of them get lost in the shuffle, but the trio of Hook, Hobbs, and Starks elevated themselves ahead of the pack with their work this past week on Dynamite.

It’s important to point out that while AEW has a roster of very talented in-ring competitors, there’s a difference between being really good at the moves and being over with the crowd. Several talents on AEW programming can dive from the top rope, but those that make the biggest impact are the wrestlers that the audiences wants to see when they dive from the top. Ultimately, drawing money is more about the individual characters than the moves.

This is why the previously mentioned Hook, Hobbs, and Starks all shined in their segment this week. Hook, based on the trendy hair style, persona, and music has organically gotten over with the audience. He has the ingredients to stand out and seems to have the in-ring ability to be more than just the entrance. Showcasing him in small samples is a wise decision because it can maximize his presentation without exposing any of the weakness of his lack of experience. Plus, limited exposure preserves the aura he has with the unique presentation. Hook is only 23 years old so there’s no reason to rush anything either. Obviously, it made sense for him to win his dad’s former championship, and the reaction of the win made him look like a star. Again with the linage of his dad, Hook as a character can evolve through the defenses of the title. That doesn’t mean that it will automatically propel him to the main event, but again, he’s 23 so it makes sense to give him a few years to continue to develop as a performer.


Ricky Starks is a classic example of a competitor that was so entertaining as a heel that he got over as a baby face. While characters are ultimately more important than the moves, make no mistake about it, one of the things that sets AEW a part from the competition is that it often sells work rate to its audience, which is fine. Starks can go in the ring and has the ability to keep pace with anyone on the roster. You can see based on his in-ring work that Starks is a versatile performer that can work with any style of opponent. The emotional post-match interview that Starks did was a way for him to turn baby face, as it proclaimed his efforts to make the FTW championship more than a novelty title, and when one of the promotion’s main selling points is work rate, it’s easy for the audience to appreciate that effort. If the FTW belt is anything more than a novelty is irrelevant, it helped Starks get over with the audience and will probably do the same thing for Hook in terms of the storylines.

Ricky Starks was presented as the baby face that put forward his best effort to attempt to excel in the wrestling business. That’s why Hobbs’ vicious strike to the face was so effective. Hobbs hit someone with a cheap shot from behind after they were exhausted from a prior match. Hobbs was a shady snake that couldn’t be trusted by one of his friends. There’s nothing deep about it, it’s very simple aspects of very simple storytelling that were extremely effective because it’s based on human psychology. It should also be mentioned that the segment maximized the brutal strike because Hobbs hit Starks once and then peered at him to let the moment get the most reaction possible. Again, it’s simple, but very effective.

Ricky Starks pours his heart out and Powerhouse Hobbs breaks all of our hearts by turning on his tag team partner! #AEWDynamite #FightForTheFallen is LIVE on @TBSNetwork! pic.twitter.com/Ve77Y5XUMe


Granted, a lot remains to be seen how either of them progress in All Elite. Maybe in a few years one or both of them get a big money offer from WWE and this discussion is moot, but assuming these two remain a part of All Elite, I think it’s very fair to say that Tony Khan has two possible main event stars in the future. At 31 and 32 respectively, Hobbs and Starks are theoretically only now at the start of the prime of their careers. Starks proved that he can get over with the audience as a fiery baby face, and Hobbs has all the tools to be a main event level heel. It’s not apples to apples, but as a direct example, the talent that gets over the most with the audience are those that can organically connect with the fans. CM Punk, Bryan Danielson, Steve Austin, Mick Foley, and John Cena became money-drawing stars because the audience connected with their characters.The reaction that Starks received during the promo, and the response that Hobbs’ sneak attack garnered are proof that they have potential to make a difference in AEW in the future.