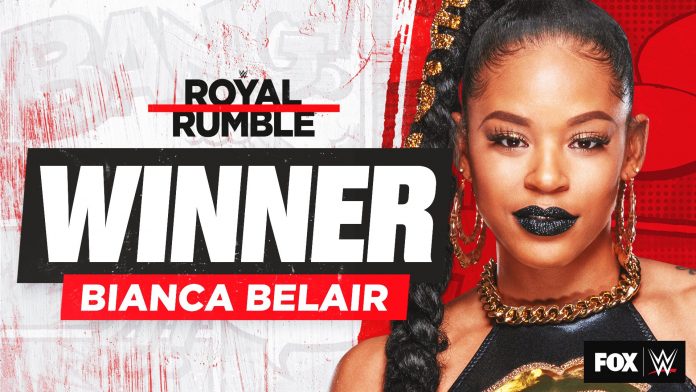 “They believe because he believes” -Mick Foley, One Night Stand 2005

Last night at the Royal Rumble, the women’s Rumble took place in the middle of the card in an effort to space out the depth of the event with the Universal championship and the remaining men’s Rumble match. However, despite a predictable, but very good Reigns-Owens title bout, and the Edge victory in the main event, the night belonged to Bianca Belair.

A former track star in college, Bianca Belair inked a WWE deal in 2016 and eventually debuted on the NXT brand the following year. She appeared on the developmental brand until she made it to the main roster last year. She had a charismatic and entertaining presentation, but most of the past year seemed as though it had yet to scratch the surface for her persona.

Not just the Rumble victory, but more importantly, the very emotional post-match promo made Bianca Belair a star.

As referenced in the opening line of this column, Mick Foley uttered those words on commentary during The Sandman’s entrance for his anticipated appearance at the ECW reunion pay-per-view. There was an authenticity to The Sandman, as unconventional as it was, that the fans could see was genuine. The real-life performer underneath the pro wrestling persona of blood, beer, and swings of the Singapore cane was as invested into his performance as the fans in attendance.

When I was growing up watching wrestling in the late 90s, I didn’t watch ECW but in 2005 I watched One Night Stand and IMMEDIATELY got the importance & aura of The Sandman. As Mick Foley said “they believe because he believes” pic.twitter.com/tCvcPEhPuD


So often, you hear the notion that the most successful performers within the sports entertainment genre are those that can amplify a part of themselves because that authenticity is what allows for the audience to identify with them to make an emotional investment in their character. That emotional investment is ultimately what draws money.

The most famous example of this is obviously “Stone Cold” Steve Austin, which is why he went on to become the biggest star in the history of the industry. Sure, he didn’t hijack a beer truck to use to assault his boss in everyday life, but he really was a blue collar guy from Texas that clawed his way up to the top of his chosen profession.

The moment that Bianca Belair realized that the Rumble match was officially over and she was going to have a featured spot at one of the biggest events of the year, the reality of what it meant for her career path set in, specifically how it could put her on a path of stardom that so many hope to achieve in the sport. The legitimate emotion that poured as her music played and the tears that flowed from her eyes showed the audience just how much this opportunity meant to her. The victory at the Rumble Rumble and what it represented means so much to the audience because they could see how much it meant to her.

Too often, the micromanaged and sanitized presentation of the WWE product lacks any emotion at all, despite that component being such a key to the success of the business in the past. I will say it right now, the WWE writing team has an incredibly tough job and probably get way too much grief from the social media fan base. They are tasked with writing 52 episodes of Raw a year and by design, not everything can be a stellar show, especially when there are three hours of content to balance with the other seven hours of original content being produced by another writing staff.

That said, you simply can’t write or script the type of interview that Bianca did after her Rumble victory. She spoke from the heart and how important the moment was to her and her family. The trademark of a great babyface is being able to garner the support of the fans, and when someone works to reach their goal and is so emotionally moved by the accomplishment, it’s very easy for the audience to rally behind her. The moment and the path to Wrestlemania will be perceived as important to the audience because it was easy to see how important it was to Bianca Belair.

Quite simply, Bianca made herself a star at the Royal Rumble and her athletic skills can be used in the ring to tell a tremendous story at WM 37. Her post-match promo wasn’t a robotic reading of someone else’s words or some goofy sci-fi special effect. It was an athlete in the middle of the ring telling the audience why the win and the chance to get a title shot at the biggest event on the calendar is important. As basic as it might sound, those are the ingredients that draw money, and the lack of those elements within most of the WWE product might be a reason why the ratings have steadily declined within the past few years. The emotion she displayed allowed the viewers to see how much the moment legitimately meant to her and it was a very believable segment. The contrast of that was that Randy Orton was “burned” on Raw just a few weeks ago and had to wear a ski mask to cover the make up that was supposed to look like burns on his face. When Orton competed in the men’s battle royal with no damage on his face, there’s nothing believable about the “injuries” he suffered in the feud with The Fiend and thus limited, if any, investment from the audience.

The 31-year-old Belair is in the prime of her career and if WWE brass follow the relatively easy path, they could have a legitimate star for at least the next decade. The story writes itself and considering how well the interview was received, video packages similar to the Bret Hart training segments prior to the Wrestlemania 12 iron man match might be an effective way to push Bianca prior to WM 37. The only variable around the scenario is who she challenges for the title, especially because both main roster brands currently have baby face champions. Either Sasha or Asuka would be solid opponents for her and it would probably be a great match. It’s possible that they might go with a baby face match with sportsmanship being the primarily focus, particularly if the veteran Asuka endorses her after the victory. Who she challenges at WM 37 remains to be seen, but one thing is for sure, Bianca Belair deserves a lot of credit for her accomplishment at the pay-per-view.