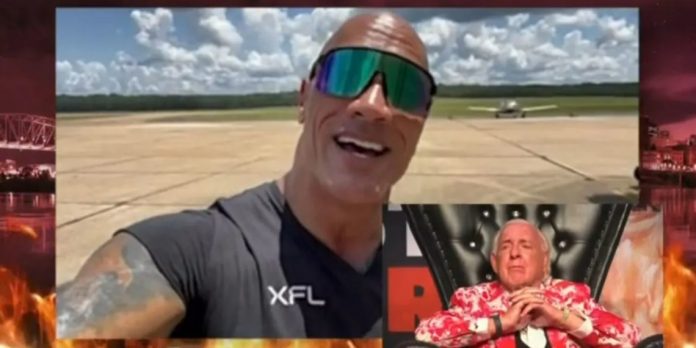 WWE Hall of Famer Ric Flair watched from his throne on stage as wrestlers, celebrities, friends, and others roast him. Video check-ins were made by The Rock, Ziggler, and a few of the other roasters. Below are some images and video clips.

The Roast Master, sportscaster Brad Nessler, introduced Flair. He was in good spirits throughout the event and was occasionally seen becoming emotional throughout many of the speeches.

Rock checked in from the tarmac and recalled several childhood encounters with Flair, including how he treated him with kindness when he was only 8 years old. Rock also remembered how Flair treated him unique and made him feel so special when they later met at an NWA convention. Later, Rock talked about working with Flair, and he shared how Flair was one of the first people to text him to confirm his attendance at the funeral for his father, WWE Hall of Famer Rocky Johnson, who passed away in January 2020.

Rock emphasised Flair’s outstanding achievements, calling them business-shifting and praising him for bringing his “Ric Flair drip” to the game, but The Great One believes that The Nature Boy’s greatest asset is his character as a person. As this still means a lot to Rock today, Rock praised Flair for being such a decent, kind person and for being kind to his family, especially his grandmother, when he worked for her in Hawaii. Rock gave Flair love and praised him on his most recent match before ending with a “Wooo! ” to the crowd.

When Flair lost to The Miz, Ziggler, posing as Nick Nemeth, spoke profanity and said it should have been him instead. In addition, Ziggler called Flair an icon, a legend, and the greatest wrestler of all time. He also made fun of Flair’s endorsement arrangement with CarShield and quipped that Flair is more or less the company’s spokesperson for windshield repair. Additionally, Ziggler talked about his interactions with Flair and WWE Hall of Famer Gene Okerlund before concluding his speech with a shot.

WWE Hall of Famer Bully Ray ripped up a script he claimed was created for him, leading the fans to applaud The Nature Boy with a “standing f**king ovation.” Brian Knobbs, a.k.a. Nasty Boy, made a live appearance on stage and was in good health. Chevy Chase, a legendary actor and comedian, also sent a quick video in which he referred to Flair as number one and stuck up his middle finger. In a tribute to WWE Hall of Famer Scott Hall, Diamond Dallas Page poked fun at the idea that Ric Flair never really retired and surveyed the fans.

When Flair and his son-in-law Andrade El Idolo face Jay Lethal and WWE Hall of Famer & Senior Vice President of Live Events Jeff Jarrett on Sunday, the Starrcast V weekend will come to a close. This will be the main event of “Jim Crockett Promotions Presents: Ric Flair’s Last Match,” a one-night-only event at the Municipal Auditorium. The complete event card, posters, and more are available at this link. FITE TV is home to all of the Starrcast V events, including Flair’s Roast.

Here are several clips, photos and tweets from The Roast of Ric Flair:

@TheRock showed up on the #RoastOfRicFlair… Wow! Moving. Thank you Rock. Thank you Ric! #starrcast pic.twitter.com/TpMJWIpgxW

Many thanks to former World Heavyweight Champion & one of the greatest performers of today, @HEELZiggler, for the message to @RicFlairNatrBoy during the #FlairRoast at #STARRCASTV!

When it was @bullyray5150’s time to speak at the #FlairRoast, he decided to take an unconventional route.

Great to see The Nasty Boy, Brian Knobbs, at The Roast of Ric Flair!

.@Torrie11 has taken the stage…

#RoastofRicFlair is rolling now, a really fun vibe in the air. No one is pulling punches. Stream on @FiteTV #Starrcast pic.twitter.com/APM2QKdmiZ

I’ve seen some aggressive roasts in my day, but that @RicFlairNatrBoy roast took the cake!!! Congrats to the NAITTTTCHAAAAA BOOOOYYY and @StarrcastEvents for such an incredible night!!! Ric is my hero!!!

It’s a FULL house here in #Nashville for The Roast of @RicFlairNatrBoy #STARRCASTV!

Members of the @Titans, @PredsNHL, celebrities, Hall of Famers & more are here with thousands of fans to salute The Nature Boy!

Shout out to long time friend of #STARRCAST @RonFunches for taking the time to take part in The Roast of @RicFlairNatrBoy!

What a night, thank you @RicFlairNatrBoy pic.twitter.com/y0VDaj83qJ

I miss @shalomshuli on the Stern show but watching him kill the room live @StarrcastEvents was awesome.

Ready for the roasting! pic.twitter.com/huxN9JCF2O